God of Neverland: A Defenders of Lore Novel by Gama Ray Martinez is a re-imagining of J. M. Barrie’s classic Peter Pan. Mr. Martinez is a published author; most writing fantasy stories. 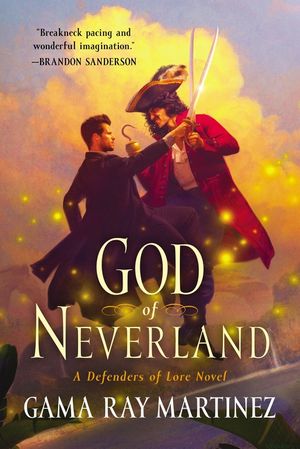 I thought God of Neverland by Gama Ray Martinez was a very creative fantasy novel. the author didn’t just retell Barrie’s classic tale, but added his own lore to it. As it turns out, the Celtic god of youth Maponos , is evidently Peter Pan. Maponos is very powerful, after all he created his own reality, but very juvenile as well, with very short memory.

Each chapter takes is very similar in structure. There’s some sort of Peter Pan reference (ex: Tiger Lily), some sort of an introduction is made, an issue arises, there’s generally a resolution, and off we go to the next chapter.

This is one of the reasons I felt it’s more of a YA book than adult. The formula doesn’t allow for any tension, we know Michael Darling isn’t going to die, for example.

There are some missed opportunities, which I thought was a shame. It was hinted in the beginning that there are more gods in the world, but nothing was done with that point. The two most interesting characters, Vanessa and Will, are nevertheless underutilized. Vanessa disappears every now and then, only to get a speaking part to realize she’s still around. Will, a sailor lost at sea (and Wendy’s husband), is stuck in Neverland never being there as a child. Seeing that crazy world through the eyes of an adult, and one who saw war nonetheless, could have been a highlight – and could have made a fine novel all by itself.  Hook, one of the most nuanced villains in literature, is another missed opportunity, because no-one in this novel seem to like Peter Pan and his fickle nature (an aspect I really liked).

I understand that this book is the first of a series, I’m sure the other books are going to be fascinating as well. The novel is more of a YA book, even though I have read it was adult oriented.
It’s not.

Nevertheless, I think this is a fine YA book, I don’t know why it was marketed for adults.

Peter Pan is missing, and Neverland is falling apart. The dreams and imagination of children all around the world, who draw power from Pan’s godlike power, are in danger of being lost forever.

To the rescue comes the youngest of the Darlings, Michael. A former Knight of the Round, specifically tasked with keeping humanity safe from mythological creatures. Michael must go back to Neverland, as an adult, find, and hopefully rescue, Peter Pan and reality as we know it.

God of Neverland: A Defenders of Lore Novel by Gama Ray Martinez