About:
Germania by Harald Gilbers is a murder-mystery taking place during the last weeks of World War II, following a Jewish investigator reactivated by the Gestapo. This book won the Glauser Prize for the best German crime novel. 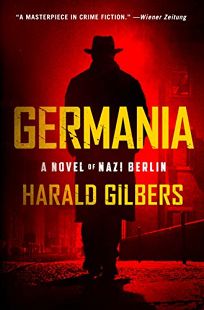 My rat­ing for Germania — 5
Buy Germania  from Amazon.com*
More Books by Harald Gilbers*

Thoughts:
This was a very interesting take on an old genre. In Germania by Harald Gilbers bombed out Berlin plays a major part, setting up events and landscapes which make it difficult for former Inspector Richard Oppenheimer, but more interesting to the readers.

The premise of the book is fascinating, a Jewish policeman brought back by the Gestapo’s SS Hauptsturmführer Vogler to solve a series of murders, in a city torn apart by war, where corpses lying around are not an exception, but the rule. Oppenheimer has to navigate a ruined city, corpses abound, his family life, secret friendships, while solving a murder.
And he’s also a persona non grata in his own city, anti-Semites all around who will kill him in a heartbeat for simply not wearing his yellow star, with no consequences of course, expect maybe a pat on the back.

The book shows life in bombed out Berlin, a city falling apart where nightly bombing raids are common, and a good night’s sleep is almost unheard of. The mood of the city is captured very well. Berliners are exhausted, suspecting, or rather knowing, that they are being lied to by the government, gathering clues from wherever they can to figure out what’s really going on.

The author does a very good job showing the oppression Oppenheimer feels on a daily base. Every event can mean the end of his life, either as he knows it or in a more literal, and lethal sense. The relationship between Oppenheimer and Vogel is a tense one. Vogel has vouched for Oppenheimer to his superiors, and will pay a heavy price if they fail, or even if they succeed. Oppenheimer, of course, is afraid all the time and he too knows the prices of failure, or success as well, will be heavy.

Out of all the horrors which are shown, the novel does have a touch of humanity in it which gives the reader some semblance of hope among the ruins. Finally, kudos to a wonderful, and somewhat poetic translation by Alexandra Rosech.

Synopsis:
Richard Oppenheimer, a Jewish police commissioner who has been stripped from his office once the Nazis took over has been secretly reactivated by the Gestapo to find a serial killer friendly to the regime. All the victims are someone connected to the party, and the case needs to be solved quickly and secretly.

For Oppenheimer, the case is an opportunity for him and his wife to survive a bit longer. He knows, however, that he is playing a dangerous game.