Friday the Rabbi Slept Late by Harry Kemelman is the first book in The Rabbi Small Mysteries, a series featuring a Jewish clergyman. Mr. Kemelman is a professor of English, as well as a mystery writer. 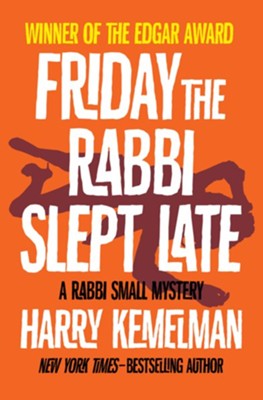 I recently bought Friday the Rabbi Slept Late by Harry Kemelman even though the book was originally published in 1964. Imagining it would be interesting to read a murder/mystery with insight into Judaism.

The mystery itself is just an excuse to introduce the characters, as well as, some of the Jewish religious laws and culture. There are hints of affairs, racism, perversions and out-of-marriage pregnancies.

I realize that the book was written almost 60 years ago, the society was different. The book could almost be a time capsule, especially the way husbands and wives talk to one another.

I enjoyed the logic Rabbi Small used to solve this mystery. This, of course, will never fly in real life, but if I wanted that I’d look out my window instead of settling down with a book.

The strength of this novel is the look into the cultural society of Jews in suburbia during the 1960s.  Rabbi Small and other characters struggle with ethical, as well as religious issues throughout.

One of my favorite characters was police chief Hugh Lanigan. Here we have an open-minded police officer, who is efficient and capable. I don’t know why I was expecting a bumbling keystone cop but I’m glad I didn’t get it.

The book was enjoyable, even though it was a bit dated. I am not going to judge a 60 year old novel based on today’s standards, it’s simply a period piece for enjoyment.

A new rabbi for Barard’s Crossing has a bit of an issue. Rabbi David Small might be implicated in a mysterious murder, all this while his contract with the temple is up for renewal.

A young nanny has been found strangled, with her handbag in the rabbi’s car. Using his experience from arguing with his fellow students, the young rabbi comes to several conclusions helping the police pinpoint the murderer.