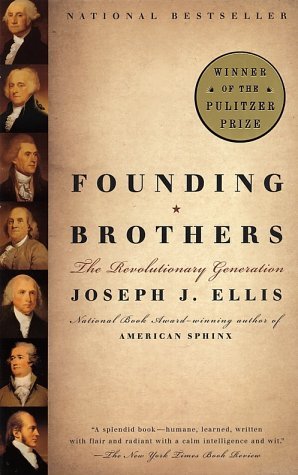 In Founding Brothers: The Revolutionary Generation by Joseph J. Ellis, the story of the founding of anew country is told from a different angle. The workings of a government which needed to be balanced with that of a new ideology.

Structurally, the book is divided into six distinct sections, each focusing further on one man. The sections are generally long essays and do not necessarily need to be read in order.

Altogether, this book gave me a better understanding of the personalities of these historical figures. I especially enjoyed reading about them as human beings, not lionized demi-gods. The book starts, surprisingly, by examining the famous dual between Vice President Aaron Burr and Alexander Hamilton. Burr unquestionably lost his career and reputation, Hamilton his life. A senseless death brought on by Hamilton’s continual gossip.

One of the most interesting aspects of the book was the fight for a strong central government. Washington, Hamilton, and Adams understood the need for extraordinary power so treaties, trade, and defense could get done. Jefferson and Madison, however, thought this type of government represented monarchical tyranny which we just fought a war over.

The Founders were hypocrites, but they knew it and erred on the side of nation-building. None of them, aside from Washington, imagined an integrated society between whites and Africans. They all wanted to free slaves and send them to either Africa, South America, or to the west of the continent.

I found this book to offer new insights into the group of six men it follows. The author focuses on the historical figures of this book because, if for nothing else, they all knew one another, as well as collaborated together.