About:
Flash Gordon: The Tyrant of Mongo: The Complete Flash Gordon Library 1937-1941 by Alex Raymond and Don Moore is a coffee table book featuring Sunday strips of the famous hero. This hard cover book collects 4 years of comic strip to bring an exciting story to a new audience. 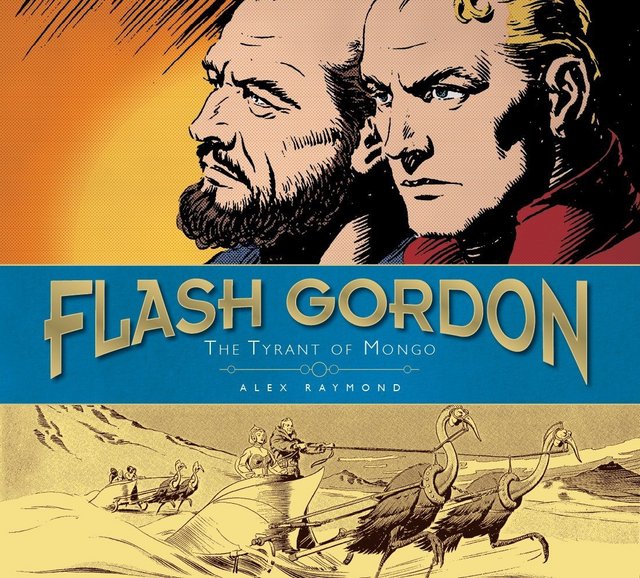 My rating for Flash Gordon: The Tyrant of Mongo – 5

Thoughts:
Flash Gordon: The Tyrant of Mongo: The Complete Flash Gordon Library 1937-1941 by Alex Raymond and Don Moore is an outstanding book which will introduce new readers to the wonderful art of Alex Raymond, drawn to the exciting story of Don Moore. For those who are familiar with the art and story, the format would make the book easier to read and the clear and clean pages make the images jump up much better than the cheap Sunday newspaper.

Raymond and Moore created worlds which even today look unique and futuristic. The buildings and outfits are fun, outrageous and creative – they scream science fiction in every panel and adventure on every page. Before being immersed in stories of future escapades, comic book writer Doug Murray (who is also a Flash Gordon historian) writes an informative essay

Flash Gordon is one of the most influential characters in the hero genre, the comics inspired movies, TV shows and other shows, like Star Trek, which would become influential in their own right.

The characters are the old familiar friends, Flash Gordon, Dale Arden and of course Hans Zarkov and are fleshed out fairly well. The story takes place mostly on the planet Mongo, complete with light filled cities to tree towns, ice caves to underground tunnels – sounds familiar?
You’ve probably seen those on current shows and / or movies but keep in mind the dates these strips were written in and you can see why this is considered an influential work.

While for me the artwork is the star of this book, Moore’s stories (5 in all) certainly display the grandeur and epic for which he was going for. It is amazing that Moore and Raymond could tell such magnificent space soap-operas in short strips published in the Sunday funnies over months (if not years). I can spend hours on each page, dissecting the panels and finding something new each time.