Fencing with the King by Diana Abu-Jaber tells of an American woman visiting, and discovering things about, her prominent Jordanian family in preparations for the King’s birthday celebration. Ms. Abu-Jabar is an award-winning author and writer living on Florida and Oregon. 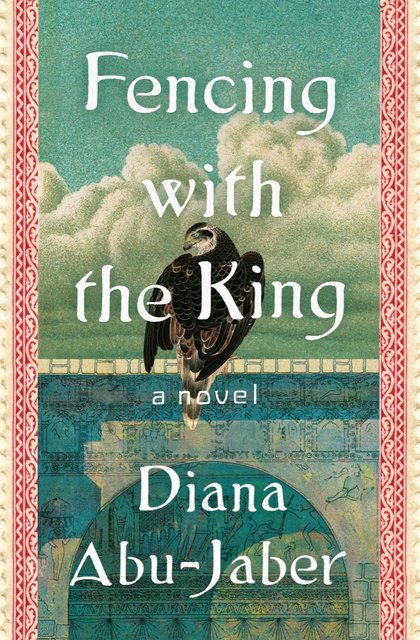 This book has a lot going for it, good writing, cultural appreciation of Jordan (politically and familial), a bit of history, as well as a good story. I have to admit that I didn’t see where this book was going, until the last quarter, which is always nice.

One of the reasons I enjoyed Fencing with the King by Diana Abu-Jaber is because both the culture, as well as the real-life figures which are hinted at, are familiar to me. I’ve lived in Israel so the food, people, attitude, and certainly the political climate are not a foreign concept.

Every once in a while, I got confused with the whose who in Amani’s family. It’s a large cast, with cousins galore and I found myself trying to figure out what’s the relations. However, many times it really didn’t matter.

I enjoyed reading about life in Jordan, the country always fascinated me with its culture and history. From legends about Petra, stories of people who knew King Hussein, as well as Jordanians I’ve met, they all sounded fascinating.

The class structure was another unexpected aspect of the book. It seemed to me that the protagonist, Amani who is an enlightened woman, got very comfortable with the concept that some are more equal than others. On one hand, I can see how easy a trap it would be to fall into, on the other however, it seemed to me to be out of character and a bit too convenient.

The story is carefully constructed, and the characters are real and complex. Ms. Abu-Jaber beautifully navigated between Amani’s personal journey, and her family’s mystery which she seems bent on resolving.

Amani is joining her father to celebrate the King of Jordan’s 60th birthday. Her father, Gabe, fenced with the King and is invited for a demonstration.

A published poet herself, Amani finds a poem her grandmother, a Palestinian refugee from the Ottoman Empire, wrote. Curiosity gets the best of her, and she discovers family secrets which have been tucked away for decades.

Buy Fencing with the King from Amazon.com*
More Books by Diana Abu-Jaber*