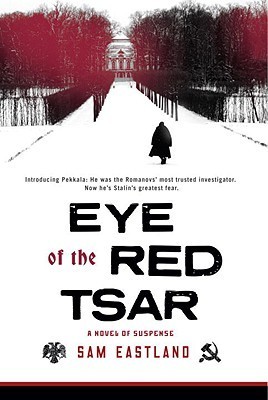 A young officer, Commissar Kirov, arrives one evening to take Pekkala back to civilization in order to solve the mystery of the Romanvos’ death.  The story juxtapose between the pre-revolution days, in the form of flashbacks, and the investigation.  Joining Pekkala and Kirov is Anton, Pekkala’s brother, who is an officer in the Red Army – but there is no brotherly love lost in that relationship.

As it turned out, Pekkala’s older brother was marked for the elite Tsar’s Finnish regiment ( Finland was a Russian colony) while Pekkala was marked to take over their father’s undertaker business.  Once Anton was kicked out of the elite unit, the father sent Pekkala to take his place which is where he meets Tsar Nicholas who spots his talent, keen mind and photographic memory.  Tsar Nicholas proceeds to take young Pekkala under his wing and bestows upon him the title “The Emerald Eye, the Tsar’s personal detective – : “a man who could not be threatened or beaten or corrupted into surrendering his sense of what was right or wrong“.   Pekkala and the Tsar become friends, their relationship blossoms until the bitter end – which is where Inspector Pekkala must start his investigation.

Coming out of exile, Pekkala soon realizes that he is a living legend to supporters of the Tsar and a boogeyman to the Tsar’s enemies.  The old joke of “I thought you were dead / didn’t exist” comes up several times during the novel. The lies and deception are endless; the sad and tragic events of the downfall of the Romanovs are portrayed very powerfully.  There is a gloomy feeling all throughout the novel, hopelessness, sadness and reflection on past events.

The novel is engrossing but too simplistic.  Pekkala has almost superhuman abilities.  He is incorruptible, loyal to death, a survivor and a photographic memory to boot.  Tsar Nicholas is portrayed as a kindly uncle, which given what we know is a bit hard to swallow and I had trouble believing in it.

I also wished there was more about Pekkala’s father.  Even though we know the father was in awe of the Tsar, and plays a very strategic and important role by pushing his sons to joining the Finnish regiment, there is no mention of him after that.  Besides a device to explain the bitterness between the brothers, it would have been nice to find out what the father thinks of his son’s exclusive role within the royal family as the Tsar’s confident – but we never got to do so.

There is some attempt at a cliché love story, but Sam Eastland did well to stay away from it as far he could – maybe as preparations for another book in the series.  Frankly, the short attempt at the romance angle wasn’t very interesting and could have been simply avoided even though it might have been written to humanize Pekkala.

Yet, Eye of the Red Tsar is an enjoyable mystery, and a quick read at that. The best parts are the alternate flashbacks where the characterization is much better.  The book is well written, competent and kept my attention throughout even though the plot which uncomplicated and easy to follow.  The story is told through the eyes of Pekkala without switching characters, but only in time and space.  The description of Stalinist Russia is fascinating and engrossing as well as the county under the Tsar’s rule. The structure of the book is fascinating – there are no chapters, just one long narrative.

At the end of the book there is a timeline of what actually happened to the Romanovs.  The timeline helps the reader distinguish between fact and fiction which is a nice touch and I would love to see that in more novels.

It seems that this is the first in a series, which should be interesting because it goes against the official communist Russian dogma of the “Workers’ Paradise” a country free of crime, filled with happy and content people.’

Buy Eye of the Red Tsar from Amazon.com*
More Books by Sam Eastland*

Eye of the Red Tsar by Sam Eastland