Eye of the Needle by Ken Follett is a spy thriller that takes place in 1940. The book, originally published as Storm Island, was Mr. Follett’s first successful effort, and a 1979 Edgar Award winner for Best novel. 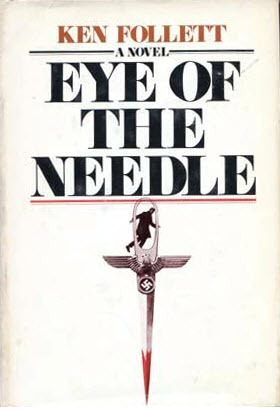 I bought this book after reading several books by the author and enjoying all of them. Frankly, I didn’t even know Mr. Follett wrote the book, as I was only familiar with the 1981 motion picture.

You can’t go wrong with writing about World War II, there are big stories, small stories, and everything in the middle. All of them are interesting, and every day we’re learning new things about that time.

Eye of the Needle by Ken Follett encompasses a big event, Operation Fortitude, a counter-intelligence operation trying to convince the Germans that the D-Day invasion will happen in Calais, not Normandy. The novel, however, also takes care to paint the villain, a German spy, as a human being. He throws up after killing, has an interest in architecture, and is a charming, caring lover. Faber is smart, daring, and in some ways admirable even though one, of course, does not want him to succeed. The one person who also has to battle through her own private war, as well as ours, is Lucy Rose, an unlikely heroine battling the odds.

This is an exciting, fast-paced, and well-written book. Mr. Follett crafts a great espionage chase of MI5 agents on the trail of Faber. They’re having a hard time, of course, as Faber is a real spy. Not a glitzy James Bond type, but a gray man, doing a gray job, the kind who is charming, yet instantly forgettable.

Mr. Follett’s narrative is skillful, portraying all involved as humans, not monsters. Each person sees their role as a small part of a bigger war, no different than those in uniform on the front lines.

Henry Faber is a German spy in England, known as The Needle. His trademark weapon is a stiletto, hence the nickname. Faber is working in London collecting information on troop movement.

David, a Royal Airforce trainee, has married Lucy, but due to a horrific car crash, he has been disabled. David becomes bitter and the young couple movies to Storm Island off the coast of Scotland.

Meanwhile, the British security service is actively looking for The Needle. They required Professor Godliman and ex-cop Bloggs to catch him.  The two spy catchers interrupt the broadcast and connect the spy to the codename Die Nadel, and to several murders due to his unique use of the stiletto.

Faber is told by Berlin to investigate the First United States Army Group (FUSAG), and his personal recommendation will be considered by Hitler himself on where to concentrate troops in anticipation of the invasion. As Faber discovers the deception of FUSAG, he must get the pictures to Berlin and change the course of the war.

Buy Eye of the Needle from Amazon.com*
More Books by Ken Follet

Eye of the Needle by Ken Follet