About:
Edge of the Map: the Mountain Life of Christine Boskoff by Johanna Garton is a biography of America’s leading female alpinist and business owner. Ms. Garton is a published author, lawyer and educator. 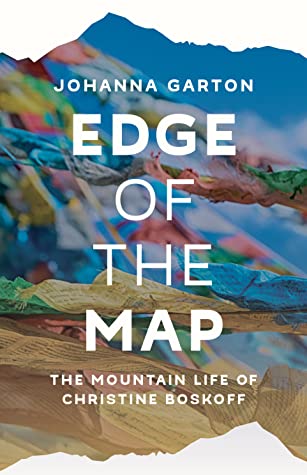 Thoughts:
I have always enjoyed books about mountaineering, the whole industry fascinates me. I have been on mountains before (notably Chile’s Villarica Vulcano), but never did any series mountain climbing, at most a dangerous uphill, very steep, and icy but nothing technical. Ice boots, crampons, and an ice-axe with an hour’s training at best. I always thought it would be cool to do something, but it would be just for bragging purposes, I don’t enjoy living in tents, on an icy hill for months at a time – nor is my body built for this type of activity.

I have read several memoirs about climbing, notably Into Thin Air which seems to be the referenced a lot. Edge of the Map: the Mountain Life of Christine Boskoff by Johanna Garton is right up there with the best of them Ms. Boskoff’s life was fascinating, full of taking chances in both personal and professional areas, as well as living a good, ethical life educating and influencing many people, for the better. Ms. Boskoff climbed six of the world’s four­teen 8,000-meter peaks — Ever­est, Cho Oyu, Gasher­brum II, Lhotse, Shisha­pang­ma and Broad Peak. She also climbed six of the Sev­en Sum­mits — Aconcagua, Carsten­sz Pryamid, Elbrus, Ever­est, Kil­i­man­jaro and Vin­son Massif.

The author uses several passages from Ms. Boskoff’s diary, as well as passages from her partner, in life and climbing, Charlie Fowler. Together with first hand interviews Ms. Garton paints a picture of Christine Boskoff which the record books can’t tell. She tells of her Wisconsin upbringing, challenges operating Scott Fischer’s Mountain Madness, an international mountain climbing outfit, her talent, ambition, and enjoyment of the sport (the records were a side effect), as well as challenges in personal relationships. Ms. Boskoff’s ability to breathe in high altitudes set her apart from many of her contemporaries, she was also the first woman to summit six of the world’s fourteen 8,000-meter-plus peaks, as well as the only woman expedition leader on Mt. Everest.

I also found it very interesting to read about the business of mountaineering. What it’s like to operate climbing guide service, the costs, and most interesting to me, the international and geopolitical relationships building and goodwill among likeminded people regardless of politics.

Ms. Graton wrote an enthralling and captivating book on a person which, I believe, made the world a better place. Extra brownie points for including maps, which I referred to several times, of the areas she writes about.

Buy Edge of the Map from Amazon.com*
More Books by Johanna Garton*

Edge of the Map: the Mountain Life of Christine Boskoff by Johanna Garton