During-the-Event by Roger Wall is a dystopian novel and coming of age story. This book won the 2018 Permafrost Book Prize in Fiction. 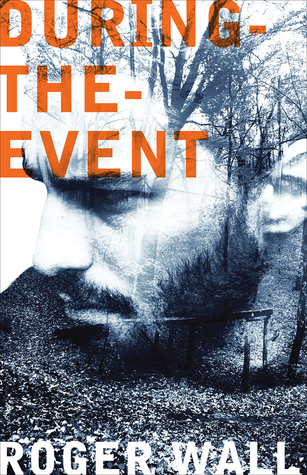 What surprised me about During-the-Event by Roger Wall is that the book does not have an antagonist to pit the protagonist against. No overly written villains, no threatening futuristic robots, not even environmental disasters or government going rouge. Just a boy trying to find himself, discovering girls and his own will to survive.

I appreciated the way the author set up the post-apocalyptic world, from the beginning. The reader immediately understands the impact climate change had had on the country, the people, and the world. D.E. tells the story he was told by his grandfather, even though he was too young to remember those life changing events.

In the first half of the book, D.E. establishes the setting and how people survived, or died in the apocalyptic aftermath. His grandfather scares him from government agents who are looking for them to kill them, and keeps him in line. After the grandfather dies, D.E. starts interacting with people he meet (of course, not all of them are well meaning), and getting out to the real world and find where he belongs, accepting the new reality forced upon him.

This is an interesting story featuring a naïve, but introspective, narrator.  I think this novel could have been 50 pages longer, the ending is abrupt and I would have liked to learn more about the post-apocalyptic society.

America has been ravaged by climate change, half the population has been wiped out, the US has become isolationist trying to get out of the mass. The government is practicing population control and those that are not indentured, are in hiding and fearing for their lives.

During-the-Event Perez, or D.E. lives with grandfather in what used to be North Dakota. D.E. is completely isolated from people and only knows what his grandfather told him. When the grandfather dies, D.E. must learn to how to integrate himself into a society, or whatever is left of it.