Dr. No: The First James Bond Film by James Chapman is a comprehensive study of how Ian Fleming’s novel became the one to start the franchise, and change cinema. Mr. Chapman is a professor of film studies at the University of Leicester. 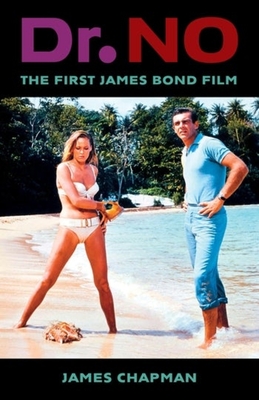 I’ve always enjoyed the escapism of the James Bond movies, and have read much about them (as well as the novels). Unlike the movies, however, it is much more difficult to tell the difference between fact and fiction when it comes to pop culture (for one). Pop culture history is usually just as fascinating and informative as politics, for example, but certainly much more entreating. And, undoubtedly with much less at stake for most of us.

Dr. No: The First James Bond Film by James Chapman is particularly well researched. I especially appreciate the time the author took to dispel myths and legends about the movie. He delved into archives, first-hand sources, as well as unfinished scripts to separate fact from fiction.
A difficult undertaking indeed, when even the movie producers themselves spread favorable rumors to lionize themselves.

When analyzing the film, the author’s main objective is to put it into the context of the times. Today Dr. No might seem outdated, and certainly out of touch with today’s morality but so are The Wonderful Wizard of Oz, Tarzan, and other works of literature which are considered classics.  The discussions revolved around the geopolitical world, the Cuban Missile Crisis (a profitable coincidence), the end of British colonialism, and more. The fact that Dr. No provided eye candy for both men and women was something that today might not seem groundbreaking, but together with its technological achievements, it was in 1962.  This analysis was, for me, emphatically the most interesting part of the book, and made me want to take one of Mr. Chapman’s classes.

There is no doubt that the movie can be looked at as a sexist, snobbish, and a male fantasy. There’s certainly merit to that criticism, but it also changed British cinema and brought us one the most successful movie franchise ever.

Dr. No: The First James Bond Film by James Chapman