In “Devil’s Garden”, a historical fiction novel, author Ace Atkins recounts the events of a historic Labor Day weekend in 1921, San Francisco. On that fateful day beloved comic and silent movie star Roscoe “Fatty” Arbuckle held a weekend of drunkenness orgy (regardless of the prohibition laws) and debauchery with several friends, sans his wife of course. Within 72 hours an attendee named Virginia Rappe was dead and Arbuckle found himself charged with manslaughter. A media circus ensued, largely due to Maude Delmont which claimed Arbuckle raped Virginia and her injuries were due to a bottle he shoved in her, or simply crushed him with his weight. 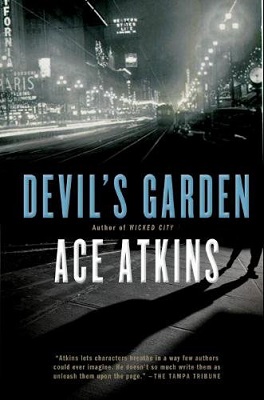 The protagonist of this sprawling story is WWI veteran and Pinkerton detective Sam Hammett who is hired by Arbuckle defense team to help them prepare for the trial, but the detective soon discovers that there is more to this case than what is told – a vendetta against the movie star. As Arbuckle’s movies are being pulled from the theatres, Sam Hammett discovers a link to the case which points at newspaper magnet William Randolph Hearst, whose newspapers are filled with venomous and sordid rumors declaring Arbuckle’s guilt.
Besides the Arbuckle case, Sam Hammett also works another case and is joined by brassy, tough as nails Federal Dry Agent Daisy Simpkins. Daisy, one of the most memorable characters in a book filled with memorable characters, is the type of woman who will show up to a raid dressed up in the most stylish dress, touting a 12 gauge shotgun.
Atkins masterfully tells the story between multiple points of view, whether in the courtroom, the streets of San Francisco or the offices of the Hearst Empire. Each character in the “Devil’s Garden” is vivid and believable and the narrative flows seamlessly between paragraphs, pages and chapters. San Francisco of the 1920’s is recreated in vivid descriptions one would have thought Mr. Atkins was actually describing a scene outside his window. The dialog is crisp, the plot is gripping and the period flavor pours out of the page.
By the way, after he retired from Pinkerton Sam Hammett started to use his middle name, Dashiell, and wrote detective novels which became classics by their own right. His gritty novels and hard boiled characters, such as Sam Spade, went on to define the pulp genre in books, as well as movies.
Buy Devil’s Garden from Amazon.com*
More Books by Ace Atkins*
Zohar – Man of La Book
Dis­claimer: I bought this book
*Ama­zon links point to an affiliate account