About:
Daughter of the Reich by Louise Fein is a novel about the daughter of a high ranking Nazi officer who falls in love with a Jewish boy, during World War II. This is Ms. Fein’s first novel. 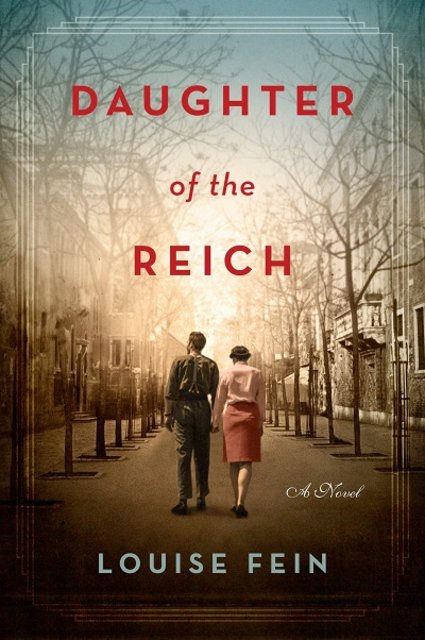 Thoughts:
Daughter of the Reich by Louise Fein is a  book which takes  place in the 1930s but also deals with some contemporary issues. I appreciated the fact that some events were inspired by the author’s family, and the respectfulness and carefulness the author used approaching these type of subjects.

At first I was apprehensive about reading this book. I do enjoy reading fiction and non-fiction alike about World War II, but I didn’t think that a book from the point of view of a 12 year old girl would be something I’d like.

I found something intriguing, though, about a story being told from the point of view of a brainwashed Nazi child, during that time where it seemed that Germany will be unstoppable. Unfortunately, it is not difficult, at these times, to understand how easy it is to manipulate the public into acting against their own best interest.

The book’s protagonist, Hetty, goes through an evolution and growing up which seemed that many in her country never did. Based on personal relationships she realizes that she is being lied to and manipulated by her family and the Nazi government.

I liked that the author pointed out, through Walter, that the Nazis demanded a lot of money from Jews in order to let them leave Germany. It wasn’t a “free for all”, and many couldn’t afford to leave, as much as they wanted. Also, many of the Jews considered themselves Germans first, fought in World War I and refused to believe that what they are hearing about and seeing, is actually happening.

The author does not go into the horror of the Nazi concentration camps. They are in the background in some chapters, and there are descriptions of what’s going on but nothing too graphic like other books about the subject, fiction or non-fiction.

Synopsis:
Hetty Heinrich is a loyal Nazi, wants to contribute, hates who she’s told to hate, and looks up to her father who is a rising office in the party and the SS. Hetty believes everything she hears from the administration and her father.

Walter is Hetty’s friend, a Jewish boy who saved her from drowning. Hetty takes huge risks trying to save Walter, and eventually falls in love with him.

Buy Daughter of the Reich from Amazon.com*
More Books by Louise Fein*

Zohar — Man of la Book
Dis­claimer: I borrowed this book for free.
*Ama­zon links point to an affiliate account