About:
Citizen Soldiers: The U.S. Army from the Normandy Beaches to the Bulge to the Surrender of Germany — June 7, 1944-May 7, 1945 by Stephen Ambrose is a non-fiction historical account of the drive from Normandy to Germany. The book is a treasure trove of soldiers’ portraits, personal accounts and interviews. 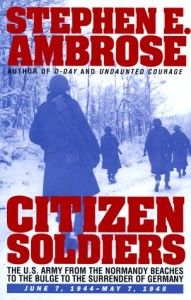 Thoughts:
Citizen Soldiers: The U.S. Army from the Normandy Beaches to the Bulge to the Surrender of Germany — June 7, 1944-May 7, 1945 by Stephen Ambrose is a fascinating book about the European theater in World War II, as told by the men on the front lines, not a media hugging officer or a dry historian. Ambrose captures the sense of history from both sides of the fence, sticks to the facts as we know them and keeps his comments to a minimum.

Mr. Ambrose concentrates on the soldiers efforts to drive from the Battle Normandy into Germany and all that was accomplished that year. The book starts off a bit slow, but picks up momentum as one gets going, and than it’s hard to put it down, as it touches many subjects, all of them mesmerizing. The consolidation of the forces on the beachheads in Normandy, the liberation of Paris, Operation Market Garden which was a disastrous assault on Holland are all covered and the author doesn’t let Omar Bradley goes unscathed from his calamitous “stroll” into Hürtgen Forest.

The clashes around Bastogne during the Battle of the Bulge were very engaging as well as the drive into German in an unseasonably cold winter. Since the book is told from ground level, some of the detail which one can only see from far way is lost, however this book certainly makes up for it with quotes and personal stories from the men and women who were on the ground eating mud.

Still, this book taught me a lot about the events I only learned about in high level with the benefit of hindsight. The information offered from the soldiers themselves is provocative and the perspective is raw. The book certainly gets across not only the sense of adventure, but also the fear and hardship experienced overseas.

So tell me, do you like books which give you an overall perspective or personal anecdotes?

Synopsis:
Stephen Ambrose, a military historian and author, blends eyewitness accounts to give the reader the feeling of what it was like to be an infantrymen in the European theater during World War II. Besides the infantry, Mr. Ambrose also touches on the air war, prisoners of war and medics.

BOOK BLOGGERS – Have you read “Citizen Soldiers”? If so link up your review below: