“Child 44” by Rob Tom Smith is a tightly woven fictional story taking place in old-school Russia where Big Brother is everywhere and a fabricated incriminating charge is just a step away – a charge no-one could defend against.
Because that would mean the State is wrong. 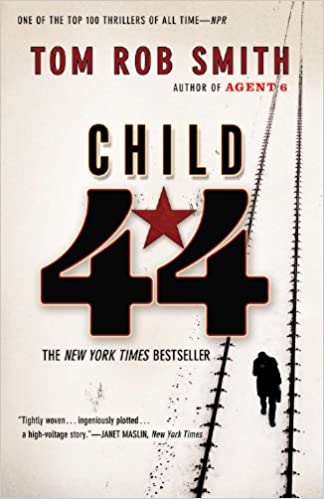 The story starts with the terrible disappearance of a boy named Andrei during the famine in the 1930’s. without explanation the story hops 20 years ahead to the terrible death of another young boy named Arkadi. At the same time, an adult Soviet citizen named Anatoli is running away from the state security forces, the MGB.

This is just the lead for the introduction of Leo, an ideologue MGB officer who is ambitious as well as unquestioning of the policies he is enforcing – believing in the State and the greater good. Leo’s faith in the State is so blind that he even goes to the house of his friend Fyodor, the grieving father of the dead Arkadi and a colleague at the MGB to tell / threaten / warn the family to stop yelling “murder” because Arkadi’s death was a tragic accident.


So said the State – even if they refuse to show Leo and Fyodor any evidence.


Violent crimes do not exist in the worker’s paradise since no-one is starving (supposedly) and the State takes care of all one’s needs (as little as they may be).


So why commit crimes?


Heck, even suggesting that there has been a crime, is a crime unto itself.

The author is unapologetic and uncompromising, the story is raw and honest but not over-the-top (I read somewhere that the author based part of the story on Russian serial murderer Andrei Chikatilo). The picture painted of Communist Russia is bleak, vivid, stark and freighting.

I enjoyed this book tremendously; it is fast paced, interesting, great characterization (including minor characters) twists galore and a surprise ending. The plot twists and turns often and leaves the reader guessing and hungry for more, there are acts of heinous violence and political intrigue.

“Child 44” is well written book, even though it’s around 450 pages the story moves swiftly and there is not a word out of place.