About:
Champion: A German Boxer, a Jewish Assassin and Hitler’s Revenge by Stephen Deutsch is a historical fiction story which juxtaposes the experiences of world champion German boxer Max Schmeling and Herschel Grynszpan who murdered a minor German official at the German embassy in Paris.  Mr. Deutsch is an author and musician whose work has been featured in television, radio, theater, and movies. 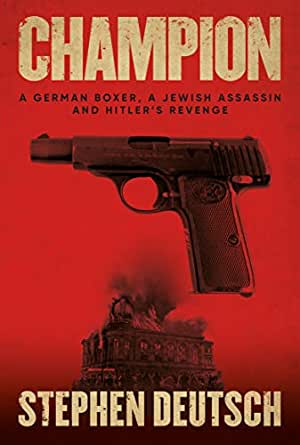 My rat­ing for Champion — 4
Buy Champion from Amazon.com*
More Books by Stephen Deutsch*

Thoughts:
Boxing champion Max Schmeling was a superstar to the Germans, to the point where he had a cult around him . As a world champion, married to movie star Anny Ondra, he was promoted by the Nazis as the ideal Aryan – only that he did not share their ideology or their touting him as a proof of German racial supremacy.  Schmeling had many Jewish friends, but constantly denied that atrocities are happening and reports of Jewish persecutions. I think that Schmeling tried to play both sides, his best bet to survive was to play along with the regime, but he did hide Jews in his apartment during the Kristallnacht pogrom, and gotten on the regime’s bad side when he refused to confirm reports of British atrocities during the fighting in Crete, a fight in which he was injured while parachuting in. Max Schmeling and Joe Louis became life-long friends after the war, and Schmeling even covered some of Louis’ funeral costs saying “I didn’t only like him, I loved him”.

Herschel Grynszpan, the son of Polish Jews was born in Hannover, Germany. Grynszpan managed to flee to Paris, where he learned that his parents were kicked out of Germany back to Poland. The angry young man murders a Nazi diplomat which becomes the justification for the Kristallnacht pogrom. Grynszpan was turned over the Nazis by the Vichy government, was put in a concentration camp and disappeared before the end of the war.

Champion: A German Boxer, a Jewish Assassin and Hitler’s Revenge by Stephen Deutsch is an enjoyable book which brings historical characters alive with all their insecurities and complexities.  The books is written in a very rich, but modest language to make it simple for younger people to read.

I enjoyed reading this book, I’ve read other books on the subject, historical and fictional, and this one stands with the best of them. I especially enjoyed reading about Max Schmeling because I knew very little about him previously.

Synopsis:
Herschel Grynszpan made it out of Nazi Germany to Paris, but the proud Jewish boy cannot let go of the indignities he suffered and witnessed. He gets a gun and murders a German official. The murder sets off a chain of events and gives the Nazis a martyr as well as reasoning for government sanctioned riots.

Max Schmeling became the poster boy for Aryan supremacy after beating African-American champion Joe Louis. Schmeling, however, is not a Nazi and does not want to become a racist symbol, his manager is Jewish and he even hides Jews in his apartment.