Blood of Elves (Krew elfów ) by  Andrzej Sapkowski (translated by Danusia Stok) is the second book in the popular series, The Witcher. Mr. Sapkowski, born in Łódź, Poland was an award-winning fantasy writer, for his novels, as  well as short stories. 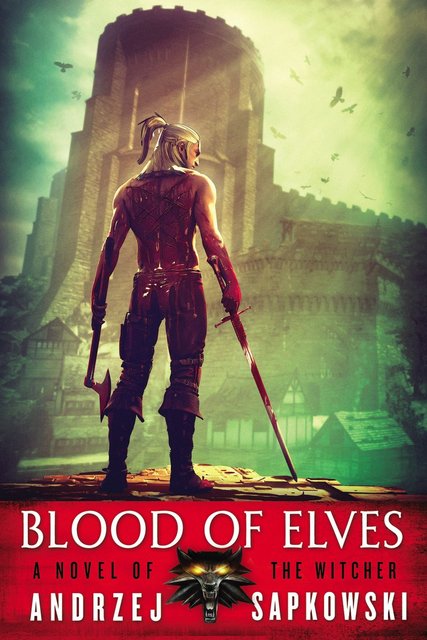 Blood of Elves by Andrzej Sapkowski could be the second, or third book in The Witcher series. It depends if one counts the short story collection, Sword of Destiny.

This book is actually the beginning of the canon series, and was much better than what I thought it would be. There are, however, many more characters and the book need to be read carefully otherwise it’s easy to lose track.

I really enjoyed the storytelling and narrative aspect of the book. The story is about Ciri, but we follow everyone else around her, as well as events which concern her. There really aren’t that many pages from her point of view.

Mr. Sapkowski introduces the reader to The Witcher’s world through conversations, songs, as well as festivals. This way it’s not just a narrative with tiring details. On the other hand, the story-line is carried almost exclusivy by dialog, with the exception of the first chapter telling of an intriguing battle.

I also appreciated the aspect of getting to know The Witchers more. The author doesn’t shy away from the fact that they are monsters themselves. The author certainly took the time to build the Witchers’ society, as well as the character of Geralt himself.

This book is an epic all by itself, I can certainly see what the fans saw before the Netflix show.  Unlike the previous book, The Last Wish, this one is a lot more serious, and has less humor and playfulness with it.

Ciri, protected by Geralt of Rivia (The Witcher) takes her to Kaer Morhen, the Witchers’ castle. Ciri is to be trained and educated by the Witchers which are still alive. Vesemir, the oldest of the bunch, asks Triss Merigold to come and help witch Ciri’s abnormal behavior, which turns out to be her monthly cycle.

Rience, a wizard is searching for Ciri, captures Dandelion the bard (Geralt’s friend) and tortures him. Dandalion is than rescued by Yennefer.

When spring arrivers, Geralt, Triss and Ciri leave towards the Temple School in Ellander where Ciri is to be educated. Ciri stays in Ellander, which the ill Triss joined a dwarven company, and Geralt tracks down Rience’s employer  (with Dandelion, medical student Shani, and sorceress Phiippa Eihat, and forces a confrontation.
Geralt is gravely wounded.

When Yennefer and Ciri leave the temple, we are introduced to Ciri’s studies through flashbacks.

Blood of Elves by Andrzej Sapkowski