Billy Boyle: A World War II Mystery by James R. Benn is a historical fiction story about an enlisted Boston policeman in England during WWII.  Billy Boyle, a young American solider, a policeman in a family of policeman finds himself embroiled in the dramatic events which overtook Europe in 1942.  However, Boyle finds himself tangled up in mysteries of treason and murder. 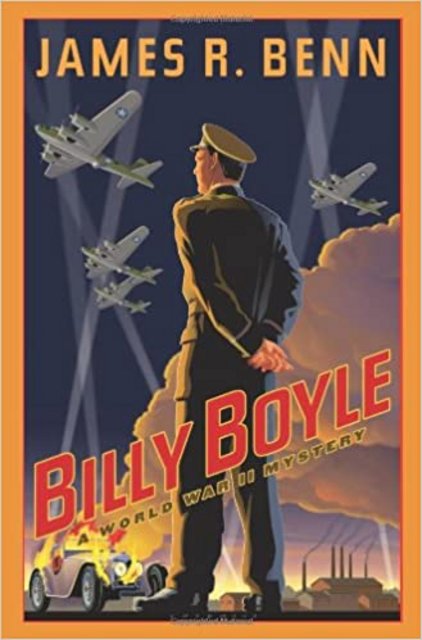 The story centers on Operation Jupiter, the allies plan to free Norway from the Nazis.  Only that Operation Jupiter, a real event, was a fake plan to draw Nazi forces away from the real fronts.  Of course, Lt. Boyle does not know that.  He is brought into General Eisenhower’s staff because of his experience as a police officer and being Ike’s relative doesn’t hurt either.  As a former Boston cop, Boyle plays a fish-out-of-water in England.  He is the butt of jokes for his Americanisms, but can also give as good as he takes (“we hadn’t had tea in Boston since we threw it all in the harbor”).  Soon Boyle finds himself investigating a murder, as well as an act of treason which sends him all over England and Norway.  Boyle conducts his investigations in a professional manner, while stepping on toes of higher officers as well as foreign dignitaries.

During the investigation we learn what makes Boyle tick during his recollections of his conversations with his father.  What makes Boyle unique among the cliché of military sleuths is that not only he is Irish (some clues which involve his family in the IRA) but Boyle also doesn’t want to be in uniform.  He grew up hearing stories about his father’s experience in WWI and living under the shadow of Uncle Frank – who didn’t make it back.

From my prior reading about the WWII generation and from talking to WWII veterans I know Boyle’s dilemma was not uncommon.  A health male who was not in uniform was ashamed to walk down the street.  A solution to the Boyle’s dilemma presented through political connections which got Billy Boyle into Office Candidate School and, as mentioned before, being a relative of Ike got him transferred away from the front and a policeman got him a cushy job at Ike’s headquarters.

Being unqualified to do anything which will contribute in any way, shape or form to the war effort Boyle can’t figure out what he should be doing.  Before he knows it, he is being escorted around by of Second Officer Daphne Seaton of the Women’s Royal Naval Service, and Lt Piotr Augustus Kazimierz of the Polish Free Corps, who goes by “Kaz”.  After all the preliminary introductions to the main characters, the mystery gets underway as Boyle spearheads a multi-layered murder investigation of a high ranking Norwegian government official.

From my military experience I already realized that many decisions are made between the choices of “really bad” and “really really bad”, but the honesty of which the author writes about these might seem a brooding to many readers, yet the honesty of the high cost of war should be realized by all. There are several surprises in this book; I have to confess that I did not see the ending – which is always nice.   People, main characters we care about, are wounded in this story, mentally and physically, the harshness of WWII, even when not facing the enemy or spending the night in a foxhole is seen even from London.

Billy Boyle: A World War II Mystery is wonderful historical fiction, the history, as far as I could tell, is accurate, the plot is intriguing and the mystery is solid.  While many of the characters are cliche, Boyle grows in front of our eyes and realizes that fighting Chinese gangs cannot be compared to the fields of battle.  Something his father and uncle tried to impress upon him before he left.  This is one of those books which do not require the reader to think too much, straight fun, a bit silly but a good and easy read overall.