About:
At Drake’s Command:The adventures of Peregrine James during the second circumnavigation of the world (Volume 1) by David Wesley Hill is a historical fiction book following the adventures of a sailor on a voyage with the famous Francis Drake. 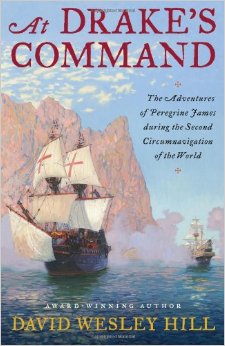 Thoughts:
At Drake’s Command:The adventures of Peregrine James during the second circumnavigation of the world (Volume 1) by David Wesley Hill is a fascinating, well written novel which I found interesting and informative. I have always had a fascination with Francis Drake, ever since I did a report on him in 5th grade. I still remember the fascination with this man who pirated for the Queen of England.
I still have my project (a slides drawn on a plastic role for an overhead viewer – a pre MS Office PowerPoint).

As I mentioned, this is a well written book with a fascinating glimpse into life aboard the s hip of Captain Drake. The author certainly seemed to have his research, but doesn’t go on monologues to prove so, he simply weaves his findings into the narrative.

Mr. Hill used his research to envision what sailors we know of might have been like, whenever he could he used the names of those who were actually on the voyage to add to the authenticity of this fictional story. The author does ask the reader to rely on too many instant aces when the protagonist is either lucky, charming or brave to pull himself out of hotspots. As a new man on the ship I could believe those occurrences once or twice (and that stretching it), but the rest of the crew would have thrown him overboard.

This is a well written, fast paced and enjoyable novel. I especially loved the chosen occupation of the protagonist, a cook, or a sea-cook, being a fan of Treasure Island I thought the homage to Long John Silver as a wink and a nod to the genre.

Synopsis:
Peregrine James is having a bad day, he is on his way to get whipped in the public square for stealing, or rather falling for a rich man’s daughter. Craftily he offers himself to a passing commander as a sailor. The commander is none other then the famous Francis Drake, on a mission from the Queen of England herself, and decides that flogging will certainly show the character of poor Perry James.

Perry, a cook, comes aboard Drake’s ship, the Pelican, even though neither he nor anyone from the crew knows where they’re going.