I borrowed this book. 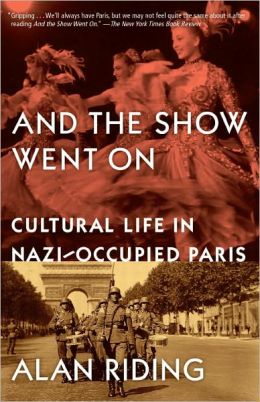 My rating for And The Show Went On – 4

About:
“And The Show Went On: Cultural Life in Nazi-Occupied Paris” by Alan Riding is a non-fiction book which tries to investigate the glimmering nightlife in an occupied city. Mr. Riding was the Paris bureau chief of the New York Times.

Thoughts:
“And The Show Went “on by Alan Riding is a well researched, readable narrative of a big story within a big war. I must admit that when I first heard of this book, my initial reaction was “who cares” with an expressive shoulder shrug. However, the more I thought about it the more the subject seems to be intriguing.
Early in World War II Germany invaded France, who after some brief resistance surrendered and installed a collaborative government known as the Vichy. The cultural world for which France was known had to respond and some strange dynamics were documented.

As an entertainment enthusiast (not the TMZ style but there are several movies, more than you think, that I can run through my head frame-for-frame) I started thinking about the great World War II movies which are currently produced, and those great movies which have been produced during the war (thanks Netflix). The French artists, actors, writers, producers, directors and more must have been itching to get out the creativeness which must have been stifled when the Germany invaded.

The book focuses mostly on writers and artists even though several of the stars and starlets of the era also grab the narrative (Maurice Chevalier, Édith Piaf, American living in Paris Josephine Baker and more). For years, even decades after World War II the French kept insisting that they resisted the German invasion – however honest history, of any country, is brutal and usually does not agree with how we see ourselves.
France is no different. 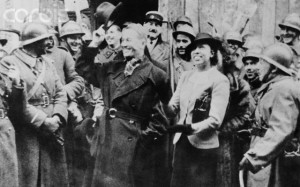 Maurice Chevalier and Josephine Baker with the troops

During the war outright collaboration or, at best, complacency were the rule, they became the exception only towards the end. The dutiful French police were very accommodating, and the Vichy government very proactive, when it came to rounding up the Jews. The first large scale rafle was in May of 1941 – and more followed.
The ambiguities and complexities which are presented in this book when it comes to the artists resisting the occupation are astounding. A famous anti-Semite kept insisting after the war that he hated the Germans as well. The Paris nightclubs made a killing amusing German soldiers.

One, of course, could ask what collaboration is and what is resistance?
Mr. Riding doesn’t judge but he quotes others who do.
The book is not concerned with the broad implications of history, but with the personal stories of artists and their response to the German invasion. Even though this is a well written book, at some parts the names and works get thrown at the reader so fast the reading becomes almost encyclopedic – however the sharpen anecdotes more than make up for that.

“We’ll always have Paris” takes on quite a different meaning after reading this book.

Synopsis:
Each chapter in the book is devoted to a different art, music, opera, dance, film, theater, literary world and more. The book also goes into some detail about the collaborative French Vichy government as well s the reprisals which happened after World War II ended and for some years after wards.
The examination of occupied life under the Nazis makes a very interesting book.