“The Templar Salvation” by Raymond Khoury is the long awaited fictional sequel to “The Last Templar“.  The Knights Templar existed for more than two hundred years doing the bidding of the Roman Catholic Church.  At some point the knights have fallen out of favor with the  Pope, were hunted down and took their secrets (and some say artifacts) to the grave.

Giveaway: Five (5) hardcover books courtesy of the publisher.
Enter below. 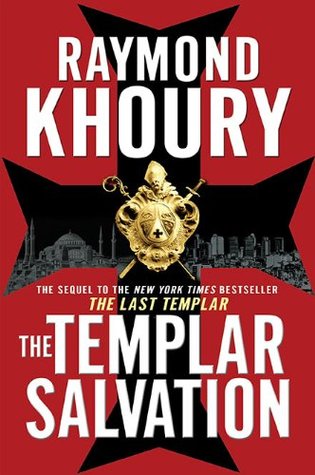 My rating for The Templar Salvation – 4
What’s so mysterious? Buy the book and find out*
More Books by Raymond Khoury*

“The Templar Salvation” is a fast, imaginative page turner which brings back archaeologist Tess Chaykin and her boyfriend FBI special agent Sean Reilly.  This is an enthralling book and I could not find any glaring historical inaccuracies in it, quite the opposite, I thought learned a few things along he way.

The book jumps back and forth in time, switching between the story of one of the last Templars and our contemporary heroes.  While the knight is trying to hide the objects of desire, central to the plot, Tess and Sean are following his footsteps trying to find them.

I did find some of Agent Reilly’s luck and actions to be a bit too implausible – it seems as if the man cannot die and if he gets hurt he just shakes it off.  Reilly also did things I thought were out of character. For example, as a former solider I know that for a time I felt naked without my gun, it is hard for me to believe that Reilly would make the mistake of putting his gun in a backpack.

“The Templar Salvation” is filled with chases and  fights (which I thought were overdrawn and could have been shortened – but that’s nitpicking), but I truly enjoyed the historical perspectives which were mesmerizing.  The reference to other characters in Templar books not written by Mr. Khoury certainly got a chuckle out of me. Overall this is an enjoyable book which was fast paced, likable characters and when it was all said and done, left me with some things to think about.

Conrad, one of the last of the Templars, is on a mission – he must save several crates and ensure their safety. Archeologist Tess Chaykin is forced by a mysterious Iranian man to solve Conrad’s mystery 700 years later while her boyfriend, FBI agent Sean Reilly, tries to save her from certain death.

Their adventure takes them to Europe & Turkey, meeting strange and wonderful people while their lives are being constantly threatened.  Part of the mystery is what’s in the trunks – the other part is what would they do if they find it.

What is in those crates that an Iranian terrorist is willing to kill for? – Find out for yourself here*
More Books by Raymond Khoury*

The Templar Salvation by Raymond Khoury