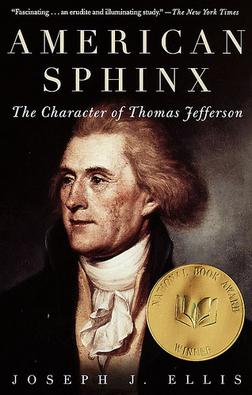 American Sphinx is an elegant, informative and well researched book, yet a bit strange and differs from other biographies.  In this book, Mr. Ellis tries to figure out what makes Jefferson tick, so some monumental time periods, such as Thomas Jefferson’s second term as president, do not get the treatment they deserve.  I think a better term would be a character study rather than a biography.

As you can see, the book starts at the dawn of the American Revolution with Jefferson’s arrival in Philadelphia as the delegate from Virginia to the Continental Congress and follows him to his later years in Monticello.

Mr. Ellis tries to explain what cannot be explained – the paradox which is Thomas Jefferson.  The contradictions between Jefferson’s written letters and his actions, his flaws and misjudgments.  Jefferson liked to live the good life, his debts were astounding yet he kept spending as if he had a money tree growing in his back yard, yet announced that his goal as president was to get rid of the national debt.  As an administrator Jefferson lacked the ability to confront others and left the state of Virginia in a dire straits after his tenure as governor.

I found Jefferson’s feud with Alexander Hamilton most fascinating, maybe because I subscribe more to the Hamiltonian point of view about the central government (even though I agree with Jefferson about some aspects).  Again, this is where Jefferson’s complex paradox comes into play, because when it suited his agenda, he quickly used Hamilton reasoning to justify his actions (such as going forward with the Louisiana purchase), even though he was a vocal critic of that same reasoning.

While I certainly recommend this book to any history fan, I’d just like to say that for me it was rather difficult to read. I don’t know why as I love history and history books – maybe because the text seemed more like a lecture than a “story”.