Agent Sniper: The Cold War Superagent and the Ruthless Head of the CIA by Tim Tate tells of Michał Goleniewski, a Polish agent who volunteered to spy for the CIA. Mr. Tate id a British documentary film-maker, and a bestselling author. 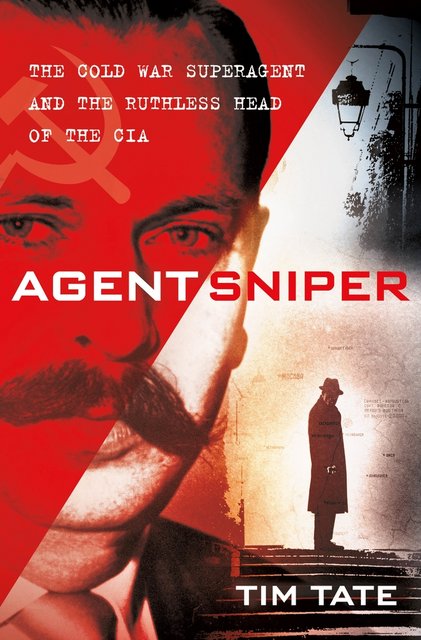 The subject of Agent Sniper: The Cold War Superagent and the Ruthless Head of the CIA by Tim Tate is an agent working for the Polish Intelligence services and the KGB. Michał Goleniewski has decided that he can no longer support the regime he is serving. Calling himself “Sniper”, Goleniewski started feeding the American Intelligence Services valuable information.

Over the course of three years, Sniper has passed loads of quality intelligence, identify moles in America, England, Sweden, Israel, and other countries. Once the Soviets were onto the fact that someone is passing information to the West, Goleniewski fled. Leaving his wife and three kids, he showed up at the US Embassy in Berlin with his mistress.

At first, the CIA welcomed Goleniewski, who kept on giving accurate information. However, politics, fiefdoms, egos, and incompetency got in the way. CIA director James J. Angleton had his own defector, Antoliy Golitsyn, who he considered more reliable, despite not being placed as high as Goleniewski.

Insisting that other defectors were fakes, Goleniewski fell out of favor, a vicitim to foe, and friendly, disinformation campaigns, as well as with it his status and financial support. Becoming paranoid, Agent Sniper became delusional making outrageous claims, such as being Tsarevich Aleksei, son of the last Tsar.

This is a fascinating book, trying to find the truth from a world built on lies. Question the odd choice of the CIA to cut Sniper loose despite the excellent, reliable, and truthful information he was providing.

This is one place, however, where the book falls short. There really isn’t a good answer of the CIA’s treatment of Goleniewski, for instance. Many of the files are, as per the author, are still classified, and his treatment remains a puzzle even after 350+ pages.

The book is an interesting piece of the Cold War, an espionage/cautionary tale of what happens when grey people living in a grey world start believing their own lies. Some of the book was certainly dry, but the excellent research – of available materials – is undeniably a tremendous achievement.

Agent Sniper: The Cold War Superagent and the Ruthless Head of the CIA by Tim Tate