Against All Odds: A True Story of Ultimate Courage and Survival in World War II by Alex Kershaw is a history book following four Medal of Honor winners during World War II. Mr. Kershaw is an author of several best sellers. 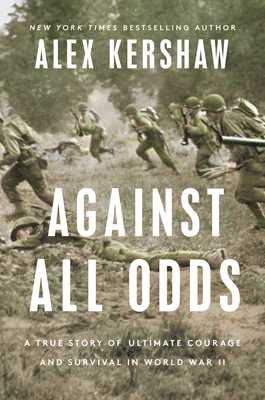 I have previously enjoyed books by Alex Kershaw, and am always looking out for new books by him. Obviously I was excited to get a copy of Against All Odds: A True Story of Ultimate Courage and Survival in World War II.

Like the other books I read by the author, this one moves fast and reads like fiction. Even though I’ve done much reading about World War II, I’ve learned several things which I didn’t know. I also got a better appreciation for the likes of General Alexander Patch, “Iron” Mike O’Daniel, and others.

The book focuses, primarily, on four remarkable soldiers and the heroics they achieved in saving the world from certain doom. Consisting of short biographies, the book is full of information, but the author kept the narrative concise, as well as focusing on relevant parts.

Not shying away, and telling a full story is, undeniably, one of the things I like about Mr. Kershaw books. He certainly keeps our heroes at ground level, making them human-only emphasizes their great achievements. We learn about Murphy’s struggles, Britt’s disabilities, Ware’s untimely death, and Daly’s struggles in the shadow of his father, Colonel Paul Daly – a hero of World War I and World War II.

I have noticed discrepancies and errors in the book, however, I’ve gotten an advanced copy. I hope they were fixed before the final print.

The book is a wonderful tribute to these soldiers, as well as their units, regiments, and divisions. These men constantly remind us that bravery is not necessarily not being scared but overcoming these fears.

Maurice “Footsie” Britt – the first American to receive every award for valor in a single War. Previously, Mr. Britt was a professional football player for the Detroit Lions. “Lt. Britt inspired and led a handful of his men in repelling a bitter counterattack by approximately 100 Germans against his company positions north of Mignano, Italy, on the morning of 10 November 1943.”

Keith Ware – The first, and only, draftee in history to rise to the rank of General. Mr. Ware received his Medal of Honor by assaulting and destroying four machine gun positions near Sigolsheim, France, then directing the tank to fire. General Ware was the first Army general officer killed in the Vietnam War and remains the only Medal of Honor winner to be killed in action.

Buy Against All Odds from Amazon.com*
More Book by Alex Ker­shaw*

Against All Odds: A True Story of Ultimate Courage and Survival in World War II by Alex Kershaw