Article first published as Book Review: A Study in Scarlet by Arthur Conan Doyle on Blogcritics.

About:
A Study in Scarlet by Arthur Conan Doyle is the very first novel featuring English detective Sherlock Holmes and his friend Dr. Watson. The story was written in 1886 and published in 1887 and marks the first appearance of the famous sleuth. 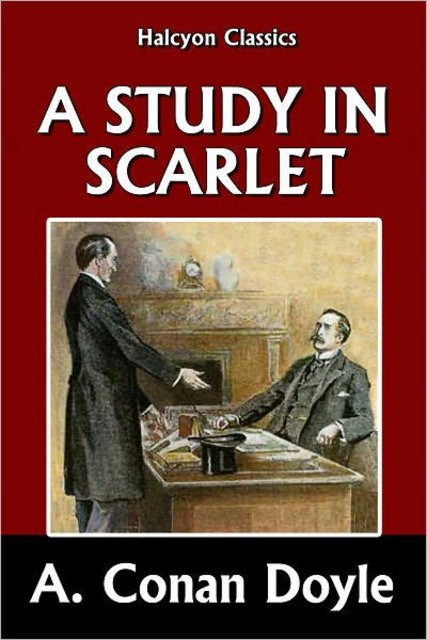 My rating for A Study in Scarlet – 3

Thoughts:
A Study in Scarlet by Arthur Conan Doyle is a strange book with a strange structure which is actually two stories thinly connected. The first part is the more interesting, where the legendary meeting between the detective and the doctor happens and an introduction to the characters as well as a murder mystery. The second part shifts from London to Utah where we get a somewhat sympathetic back-story to the murder and his deed.

This, I feel, is one of those books where it is better to know what will happen in the future in the context of the Sherlock Holmes universe and stories, not the plot. The story does give Holmes his ability to show off his analytical powers as well as his attitude which makes him a great detective but a lousy human being.

The story is awkward in its construction and I kept re-reading some parts thinking I totally missed something. This was the first Holmes story I read since I was 12 or so, I remembered them all being short and thought that maybe the book is constructed of two short stories, one a detective novel and the other one isn’t. However, that wasn’t so and everything was tied up for me at the end.

One can certainly tell of the immense talent the author has as the mystery unfolds. The dialogue is witty, filled with dry humor and entertaining, the characters are engaging and interesting and it’s a nice touch that the protagonist’s roommate tells the story.

While it was a weird reading experience, I did enjoy the book and the introduction to the great detective. I must admit however that if I wasn’t already familiar with Holmes I probably would not have read the other books in the series (but I did).

Synopsis:
Dr. Watson, coming back from military service in India and Afghanistan, needs a place to live. A friend introduces him to Sherlock Holmes and they ended up rooming together in an apartment in Baker Street, London.

Holmes is a “consulting detective” and an opium addict, is soon on his first case, a murder, taking his new friend with him. Watson is constantly amazed by Holmes brilliance, arrogance immense knowledge in some areas and yet very little in others. Holmes explains that he only needs to know certain subjects for his occupation and not let the rest clutter up his mind.

BOOK BLOGGERS – Have you read A Study in Scarlet? If so link up your review below: