A Single Swallow by Ling Zhang (translated by Shelly Bryant) is an award-winning Chinese novel taking place during the Japanese occupation of China during World War II. Ling Zhang is an award winning author. 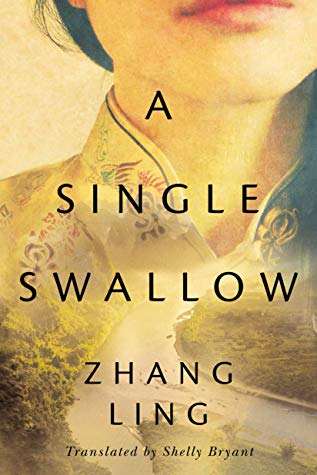 Even though the story is told through the multiple points of view of three men, the real start of the book is the woman who they are all in love with, in some way or another. Ah Yan, or Swallow, leaves her mar on each one of the men at some point in their life, which they reminisce about after their death.

The narrative of A Single Swallow by Ling Zhang is very lyrical, great translation by Shelly Bryant who, I believe, really captured the essence of the story and the spirit of it. A novel about a very strong woman, who constantly puts others before herself, many times in a heartbreaking fashion.

I thought that the style of making the three narrators supporting actors in the novels, while the main protagonist view point is left alone was very creative story-telling. Even though the three narrators are dead, and tell the story in hindsight, the overlapping of their narratives creates a strong story.

The first chapter or two got me interested in the concept, ghosts meeting up in a per-scheduled date and time, even though they had to wait a few decades for the meeting to cumulate fully. The narrative got slower than, but the rich language kept me going and once Ah Yan got introduced the whole story took off.

There are several brutal scenes, after all this is a novel about World War II. The way the Japanese treated their Chinese captors, the way the Communists Chinese treated their own people, and of course the horrible events which Ah Yan went through are not for the faint of heart, but make the story much stronger and significant.

This is, however, a slow novel and there are a few parts which, I felt, could have been cut to make the pace faster (why do I need to know about two dogs, it added nothing to the story).

The story follows three men, American missionary Pastor Billy, brash gunner’s mate Ian Ferguson, and local soldier Liu Zhaohu who promised one another that they will each other, after their deaths on the anniversary of Japan’s surrender.

As each one takes a turn telling their story, they all come down to Ah Yan, or Swallow, a girl each man loved in their own way.

A Single Swallow by Ling Zhang