edited by Samuel Shimon is a collection of stories and poems.  The collection is the product of a literary competition in the Arab world, young authors and poets, all under 40 years of age, competed in a contest sponsored by, among others, Banipal magazine in the Hay festival. The best 39 short stories, poems and novel parts were published. 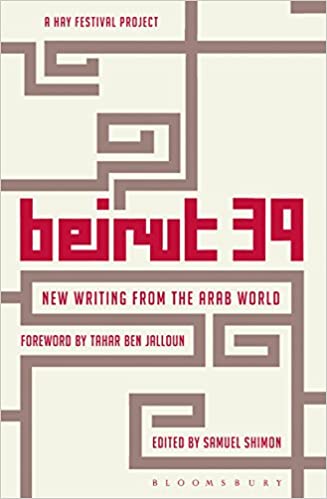 The stories and poems touch on many varied subjects, politics, sexuality and culture. The selections are as individual as the authors and tell such tales as the wife of a Damascus man who is measuring, for good or bad, her various lovers; or the man who hides his gay identity from his mother while watching a movie about the subject on satellite, hoping she wouldn’t wake up.


There were two standout stories I thought, in this book which were a cut above the rest: “The Twentieth [9/11] Terrorist” by Abdullah Thabit and the straight-to-the-point “Coexistence” by Ala Hlehel. Both stories were told from a very believable and vivid point of view which I found refreshing as well as enlightening on an intellectual level. “The Twentieth [9/11] Terrorist” tells of the harsh system of education in religious schools, how a young boy could get sucked into such an education – against the wishes of his parents – and he is literally beaten into submission and submits to a life of misery. “Coexistence” is the ironic story of a Palestinian-Israeli writer who scribes a letter to a Palestinian general (in the words of the author) begging to stop bombing attacks in the Israeli port city of Haifa; a city which is ofen portrayed as a model of Arabs and Jews sharing the same piece of land. However, the writer’s motives are selfish, because of the writer’s high profile in the Haifa; journalists are calling for comments for their stories – and that is a bother.

” has to be read slowly, I felt, as the Arab language is spoken, with emphasis on certain words and phrases. The book’s topics jump greatly, from sad war stories to joyous self discovery and the fast reader might find himself or herself confused. The pieces in this book are diverse and wide ranging; the collection is complex and challenges the mind and ranges from traditional to modern.

Some of the stories are excellent and I can only imagine that are much better in the original Arabic, some I thought were not as good. I found the “short stories” which are simply extracts from longer novels to be disruptive and not as moving as the short stories themselves. The rhythm of the book is a bit of a challenge, maybe because the translations of each piece was done by a different person (mostly), some excellent and others simply good, is why the book doesn’t seem to flow – but that’s OK since it is a collection of stories and is not meant to be read in a marathon session.

This book certainly isn’t for everyone. If you like to try new topics, new writers or new cultures you could learn a lot.

Do you ever read out of your comfort level?