About:
“Beatrice and Virgil” by Yann Martel is a fictional book, a follow up to the author’s wildly successful “Like of Pi”. A strange story which is suppose to be an allegory for the Holocaust. 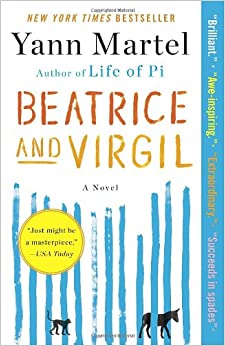 I really didn’t know what to think about “Beatrice and Virgil” by Yann Martel. I didn’t like it yet didn’t hate it either.
I was impartial to the book, I wasn’t offended, I wasn’t touched and I didn’t learn anything from it.

Maybe it was because I looked forward to reading it.

The narrator of the book is Henry, a famous author, who is taken by a play sent to him by one of this fans. The play is about a donkey named Beatrice and a monkey named Virgil. The author turns out to be a taxidermist who might have been a Nazi collaborator and the play is suppose to be an allegory for the suffering in the Holocaust. The taxidermist even has a stuffed donkey with a monkey on her back – get it?

While I found the story of the author and the taxidermist somewhat interesting, the play within the novel was banal and bored me to tears (I don’t like reading plays to begin with), the allegory to the Holocaust misguided and indifferent.

It seems to me that Mr. Martel has written the play first and when he realizes that it’s not going anywhere or simply just not that good or interesting, so he decided to frame a book around it.

As mentioned, I was really looking forward to reading this book. I had relatives who were murdered by the Nazis, and relatives who obviously survived so I find the history not only fascinating but deeply personal as well. It is obvious to me that Mr. Martel sincerely set out to write a touching story which brings several sides (survivors, tormentors, witnesses) together in order to create an emotional story considering the consequences of the Holocaust on its victims. What I read though was a story which focused on the dramatic instead of giving the reader some insight.

Henry is a famous novelist who has moved with his wife to a new city (from Canada) and cannot find a paying job. Henry takes clarinet lessons, joins a theater company and entertains working in a chocolateria.

An envelope arrives at his home which catches Henry’s eye, it contains part of a play and a story by Gustave Flaubert called “The Legend of Saint Julian Hospitator” which is about a boy who is mean to animals and is cursed because of it.

The play is written by the sender and is about a donkey named Beatrice and a monkey named Virgil, Henry tracks down the play’s author, a taxidermist who might have been a Nazi collaborator.

BOOK BLOGGERS – Have you read “Beatrice and Virgil”? If so link up your review below

Beatrice and Virgil by Yann Martel

Leave a Reply to Juju at Tales of Whimsy Cancel reply