The book “Tobacco Wars” (book review) was a strange one. I’ve had several questions about ti and Mr. Seesequasis was kind enough to answer them. 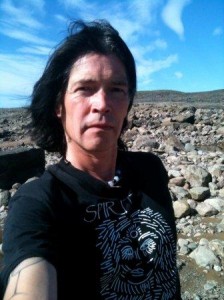 Q. How much of the part about Pocahontas is based on actual events?
A.Only a few ‘bare’ essentials – no pun intended. Pocahontas was married to John Rolfe, she did attend Ben Jonson’s masque in London, the King was in attendance beside her, she did get pregnant. The rest is fiction, somewhat stylized as a period romance but with a deliberately sparse narrative arc – one can barely imagine what she experienced in traveling to and encountering an ‘old’ world she previously knew nothing about. It must have been dream-like to her. In its essence her ‘discovery’ goes both ways and her historical reception as an ‘Indian princess’ laid the foundation for all the romanticization of her to come. Regardless of that fact, it was integral to me that she was never a ‘victim’, even becoming an entrepreneur exporting tobacco.

Q. How much of the part about Mother Bear is based on Indian legends?
A.Bear exists within many Native American legends and  myths. In writing these parts, which some readers are taken aback by, I was trying to impart the sense of how these legends were originally viewed as an effrontery to morality and the process of conversion of Native Americans to Christianity, particularly in a time of rising puritanism. To try and impart some sense of that these myths are written deliberately over the top, satirical, sexual, as they must have been originally viewed by the first priests and settlers. To convey that to a modern reader is difficult so, by necessity, these myths are timeless in content, provocative or farcical in nature, depending on your view, and touch on contemporary stereotypes of the ‘drunk Indian’, ‘reservations’ and ‘wildness’.

Q. What were you trying to convey by paralleling the two stories?
A.Simply, that when world’s collide it becomes, by necessity, multi-layered and complex. There have been reams of books on the ‘tragedy’ of 1492 and contact but contact in my view is inevitable  and hard and fraught but also opens new potentialities and has goodf stuff in it as well as bad. To me that is the strength of America – not the melting pot where all aspects boil down to a bland broth, but a fervent and challenging mix that is potent and charged. So in answer, yes, the myth – Bear Woman – is the ‘wild’ of this new continent, the essence that hopefully will not be tamed. America, at its best, is restless and re-inventing itself. That process began with the first settlements and it continues to change the world – irreversibly – so the two strands must parallel each other.

Q. What is your writing process like?
A.Most of Tobacco Wars was written outdoors, in the woods or on hills or by lakes. All of it away from a desk. All on paper initially. That’s the where. The what is finding that spark that takes your imagination and says ‘go for it’. And then it;s just work and editing and just doubting, doubting and doubting till it’s done.

Q. What are the challenges of book promotions in the social media age?‬
A.Well the internet of course has changed everything. Completely. Writers of any sort need to be ‘out there and with the demise of bookstores, the dearth of print reviews, and, unless you’re a big name, the lack of any promotion money, you have to bust a leg or other parts of the human anatomy to get out there. But if mainstream outlets are drying up, the inverse is that the rise of blogs, online book clubs, radio spots, video trailers – are signs that people still want to read literature. The bottom line is you want people talking about your book – like the old cliche – there’s no such thing as a bad review – and if there’s debate, even a buzz, controversy, all the better.

For a writer to be reviewed in a blog, positively or negatively, has more impact then reading to 10 people in a bookstore or bar. Particularly, if you don’t have the benefit of a publicity machine behind you, you must not only be a writer but a promoter and a marketer. Not everyone will like your work but as a writer respect your own work and most of all, respect people who take the time to comment.
|
Shame­less plug dis­guised as a wise ass ques­tion: Why do you love ManOfLaBook.com so much and often visit the web­site?
Wise Guy Answer: I respect all bloggers who promote reading literature – whether it’s my cup of tea or not. But to go a bit beyond that, a good book blog site is well designed, easy to read and navigate, and kudos to you, gives the internet traveller a sense of your own tastes. Your taste test is perfect on that account.
|
I, for one, am grateful I got to ask these questions and the answers help me understand “Tobacco Wars” better.
|
Zohar – Man of la Book