Jason Mott, author of The Returned (my review) and newly minted New York Times best seller list has been kind enough to take some time out from his successful career and answer a few questions for this blog. 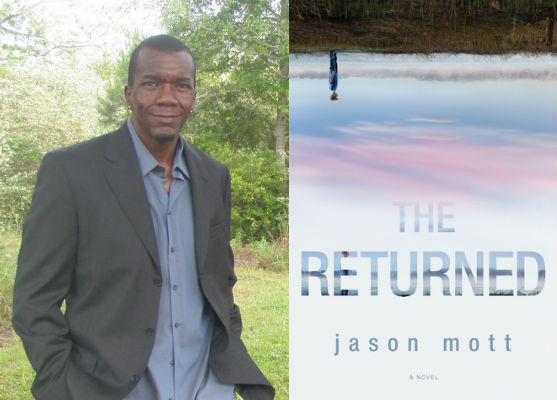 Q. After writing poetry, why did you decide to write a novel?
A.  Actually, my writing is more rooted in fiction than in poetry.  When I first began writing, it was in fiction.  It wasn’t until almost ten years later that I began working with poetry.  And, ever since, I oscillate between the two.  So, for me, this transition was just my return to my first love.

Q. How did you come up with the idea for The Returned?
A.  This novel began in the summer of 2010. Both of my parents have passed away, and in the summer of 2010 I had a dream that I came home from work and found my mother sitting at the kitchen table, waiting for me. For the rest of the dream she and I just sat together and talked about all the things that had happened in my life since her death—college, new friends I’ve made, my focus on becoming a writer. She even teased me a little on not being married yet. It was one of the most warm, comforting dreams I’ve ever had.

I woke from that dream certain that it had been a real experience. I genuinely expected to find her in the living room. In the days that followed, I couldn’t get the dream out of my head. And, one day, I was having lunch with a friend and I told him about it. At some point he said “What if that really happened? And what if it wasn’t just her?”And that was where The Returned began.

Q. The Returned has many unanswered questions; did you worry about people’s reaction to that aspect of the novel when writing?
A.  Sometimes I worry, but I truly feel that readers will come away with the answers they really need, and be able to discuss those unanswered questions with one another.  Novels should spark dialogues, and I hope The Returned does that.

Q. The story is told from several points of view, including short passages seen from the eyes of the Returned. Why did you feel it was important to tell the story through the eyes of the participants instead of an omnipotent narrator?
A.  Death and loss are such intimate and personal experiences, that I felt that I needed a way to include both the myriad of ways we react to it, as well as all of the way the world might truly react to an event such as that which occurs within The Returned.  I used the vignettes between chapters to broaden the scope and incorporate as much of what I felt I could.  Hopefully, readers will enjoy it.

Q. What are the challenges of book promotions in the social media age?
A.  The hardest part, and I feel it has always been this way, is simply getting noticed.  As a debut author, you’re an untested and unknown commodity for publishers, book buyers, and readers.  More than that, you’re one of thousands trying to get noticed.  So it’s a great challenge to stand out in the crowd and have readers take a chance on you.  But then, when someone does, you’re amazingly grateful.  I can’t begin to tell you how much of a debt I feel I owe to anyone who purchases The Returned.  They’re allowing me and my writing into their lives, and that’s magical.

Shameless plug disguised as a question: Why do you love ManOfLaBook.com so much and often visit the web¬site? (in jest, feel free to be a wise guy).
Wise guy answer:  Best steaks in town. Period. All kidding aside, it’s a great site for discovering great books.

Thank you Mr. Mott for answering my questions and much continued luck in your career and with The Returned.