Jason McMillan wrote The Grey Zone, his first novel which takes place in a future where The United States has joined the Global Federation of Nations to implement the Basic Human Standard, which improved life for much of the world. Mr. McMillan has been kind enough to answer a few questions about his first book and writing. 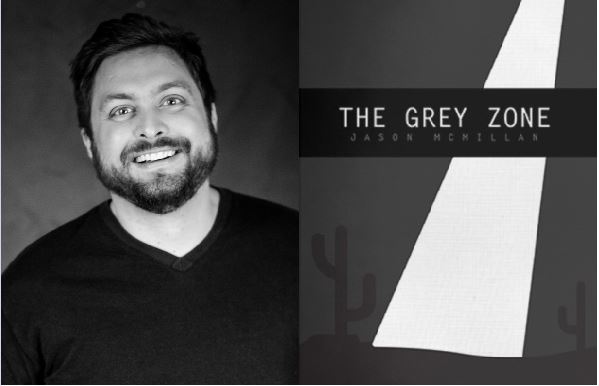 The Grey Zone is available for purchase at Amazon.com

Q. How did you go about writing your first book?
A. Well, I was reading a book about Timothy McVeigh and the Oklahoma City bombings. I was struck by the similarities in McVeigh’s beliefs and common political beliefs concerning the federal government today, as well as the similarities between McVeigh’s violent actions and the violent actions of ISIS or the IRA. I wanted to explore an American society in which radical belief can quickly morph to radical violent action and decided that, in order to best explore common American domestic terrorism, it would be best to place the story some time in the future where I could control the circumstances in which that terrorism arose. That was, I believe, November or December of 2015. I wrote a short story on the subject, part of which became the prologue for the book. I had written personal short stories before but had never had anything published. When I finished writing the short story about The Bucket Bistro attack, I felt that I had only scratched the surface on exploring this world I had put on paper. Without any plans to publish, I kept writing and, a year and a half and 114,000 words later, I had The Grey Zone.

Q. What research did you do preparing to write The Grey Zone?
A. I cannot emphasize how indispensable of a tool the internet was in writing The Grey Zone. First, the story takes place in more than a dozen locations across the earth. While writing the book, I was working full time to pay the rent, so was financially and occupationally limited in traveling options. Google Earth and Google images brought the locations I set the story in to life. If I wasn’t able to physically visit Chicago or Santa Fe or New York, I was able to dive in to the locales virtually. Also, since the story is set 45 years in the future, I had some leeway in creating the scenes and wasn’t tied down to current physical descriptions. I read news stories about future technological and political prospects to include in the book. I listen to podcasts while at work and would be struck by a tidbit or idea that I would jot down in a notebook. A couple books that I believe deserve recognition and that I would recommend anyone interested in the themes explored in TGZ are The Anatomy of Fascism by Robert O. Paxton, The Oklahoma City Bombing by Charles River Editors, and The Fourth Industrial Revolution by Klaus Schwab. I found that inspiration can come from any type of media – books, magazines, newspapers, TV, movies, podcasts – so, I always had my mind open to connections to the themes and characters in the world of The Global Federation of Nations.

Q. How did you go about world building? Did you have to plan it out or just built is as you continued writing?
A. As it came to world building, I had ideas that I wanted to include and tones that I knew I wanted to stretch across the length of the story, but for the most part, I built as I wrote. As I write, I have very crude notes that I want to include in the story and an idea of where I want the story to go in my head, but I mostly let the characters actions and characteristics lead me to the next page. I find that, when I try to shoehorn in something that I previously wanted to be a part of the story, but which didn’t follow the progression of the character’s actions or personalities, it will read forced and unnatural. However, when the first draft is done, the editing process is a place where I will flesh out the world and add details that will transport you from your couch in 2018 to the GFN – Security Office Headquarters of 2072.

Q. Will we see more of Natalie Kelley?
A. You will be seeing more of Natalie Kelley! I am currently writing a sequel to The Grey Zone which will pick up shortly after the events of the original book. There is no official title yet and the release date is tentative, but I hope to have the sequel published sometime around the end of 2019. In addition to a sequel, a very talented voice actress is working on bringing Natalie Kelley and the world of The Grey Zone to audiobook. That should be available in the next month or two.

Q. You are active on the Social Media front. How do you find the experience? Any positive/negative experiences in book promotions?
A. As a new author, I have found that it is difficult to establish a reading audience outside of your family and friends. Social media helps you reach people you never would have been able to before. I think that having an active and engaging social media presence is a necessity for any new author wishing to find that audience. To this point, I have had a largely positive experience in promoting The Grey Zone on social media. Any input directly from readers, whether it be positive or negative, is beneficial to an author. I may have started writing The Grey Zone for myself, but once I released it to the public, the public became an owner of the world that lives inside the pages and I want to know what kind of ideas people have about what happens and what will happen to the characters in the Global Federation of Nations.

Shameless plug disguised as a question: Why do you love ManOfLaBook.com so much and often visit the website?
A. ManofLaBook.com is essential online browsing material for any reader because of the combination of diversity and insight on the site. One of my favorite things of being a consistent reader is being introduced to new titles and ManofLaBook.com does a great job of bringing a wide variety of genres and titles to the visitor’s attention. When I visit ManofLaBook.com, not only do I get introduced by a variety of titles, but I am able to get insightful reviews from a trusted source. You can’t ask for more from a website on books!

Article Name
Author Q&A with Jason McMillan
Description
Jason McMillan wrote The Grey Zone, his first novel which takes place in a future where The United States has joined the Global Federation of Nations to implement the Basic Human Standard, which improved life for much of the world. Mr. McMillan has been kind enough to answer a few questions about his first book and writing.
Author
Man of la Book
Publisher Name
Man of la Book - A Bookish Blog
Publisher Logo