David Margolick’s book Elizabeth and Hazel (my thoughts) is a fascinating book about two fascinating women. The book tackles tough and sensitive issues while following the trials and tribulations of Eliz­a­beth Eck­ford and Hazel Bryan were cap­tured for pros­per­ity in a pho­to­graph by Will Counts while on Elizabeth’s first day at the newly desegregated Central High School in Little Rock, AR. 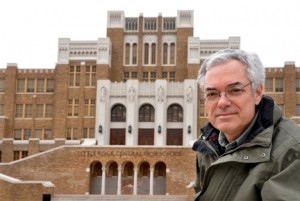 Q. What prompted you to write Elizabeth and Hazel?
A. I had known and been fascinated by the famous photograph of Elizabeth and Hazel, taken in front of Little Rock Central High School during the desegregation crisis of 1957, as long as I can remember. Who, after all, doesn’trecognize Hazel’s hate-filled face? It has come to represent all of the malice and racism of the South during the early days of the Civil Rights movement, while Elizabeth, dignified and stoic, personifies the great courage of blacks fighting bigotry. So when I went to Little Rock in 1999 and learned, from a poster at the Central High School National Historic Site showing the two of them, as grown women, apparently reconciled — they were smiling and seeming at ease with one another — I wanted to know how something so improbable had ever come to pass. So I started looking into it.

Q. From reading the book I got the feeling that there is a profound connection between Elizabeth and Hazel. Did you get that feeling as well? Why or why not?
A. As I said, for all their very serious differences, the two have a surprising amount in common, like their intellectual curiosity and their independence. Neither has lots of friends, which is why, I think, they so enjoyed their time together.
|
Q. During the short history of the US, the Jews and African Americans always stuck together during the civil rights movement. Why is the bad blood now?
A.It’s a complicated issue. First, there were always tensions between the two groups, even while they were cooperating in the civil rights movement. Second, they grew apart as Jews entered the American mainstream more quickly than did blacks. They parted company on some issues, like racial quotas. Some Jews might have felt more comfortable as sort of the senior partner in the coalition, and retreated when blacks became more assertive and confident themselves.
|
Q. What are the challenges of book promotion in the social media age?
A. The old powerhouses in print journalism don’t have quite the same clout, and there are fewer outlets. It’s harder than ever to get coverage in the electronic media. And, particularly older writers less fluent online don’t really know how to negotiate the Internet. We know so many of our readers are there, but we don’t know how to reach them.

Q.  Shame­less plug dis­guised as a ques­tion: Why do you love ManOfLaBook.com so much and often visit the web­site?
Wise guy answer: I just like that you care about books and authors.

As you can see, here are many issues discussed in the book. I highly recommend it.