I “discovered” Carolina De Robertis  (website | Facebook | Twitter) in the local library. This was just after I started this blog and getting back to reading more than a few books a year. Since I traveled in South America I have a soft spot for books dealing with the area (actually I love to read books about anyplace I’ve been to) and picked up Ms. De Robertis first novel The Invisible Mountain, which I thought was excellent. When I saw the listing for Perla (post coming tomorrow), I immediately recognized the author’s name and signed up for the tour with thinking twice. 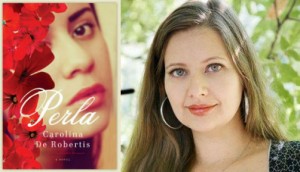 Q. what prompted you to write about the subject of the missing Argentinean people?
A. I first became fascinated with the Argentinean disappeared while I was researching my first novel, The Invisible Mountain, which spans ninety years of Uruguayan history, including but not limited to the dictatorship of the 1970s and 80s. In researching that dictatorship, I inevitably stumbled onto sources that also reached into the military regime that took power around the same time in neighboring Argentina. There was so much richness in that history, from painful truths to sheer human drama, that a novel inevitably began to take shape in my mind.

I have roots in both countries—my parents are both Uruguayan, but my paternal grandparents were Argentineans in exile under Juan Perón, and I still have many relatives in Buenos Aires—so in that sense, perhaps it was natural that my second book would take me “across the river” from Uruguay to Argentina, to explore its historical legacies, its wounds and triumphs.

Q.  I’ve often wondered about people who find themselves on the wrong side of history? Have you interviewed / read about any of them for your research? What is your opinion?
A. In the case of the Argentinean Dirty War, the “wrong side of history” would be those who took part in the disappearances – in kidnapping, torturing, and killing 30,000 innocent citizens. Their psychological reality was something I very much wanted to explore in this book. I wanted to portray the full cost of such a national tragedy, including to those who were perpetrators.

I read interviews with former Argentinean military officers, particularly with Adolfo Scilingo, who became famous for confessing his part in the death flights, and who makes a cameo in the novel. I also read books like The Lucifer Effect: Understanding How Good People Turn Evil, and Eichmann in Jerusalem, by Hannah Arendt, about a Nazi war criminal. These sources were indispensable to me in creating the character of Perla’s father, a complex, implicated man whom Perla truly loves.

Q.  Your previous book The Invisible Mountain was a grand family saga, Perla is more of a personal story with fewer characters and timelines. Did you find either of them more difficult to write or was it just different?
A. They were challenging in different ways. The Invisible Mountain was challenging in its sheer scope – its span of a whole century, its enormous cast of characters, its various points of view. Its structure, however, is relatively simple: aside from the very first page, the whole book is essentially chronological, from the turn of the twentieth century right up to 1990.

Perla is more of an intimate portrait, in which the slow collision between two very different people—Perla and her mysterious guest—catapults them both on a transformative journey. However, the structure of the book is subtler, with memories and flashbacks interweaving with the present moment to create a full picture of how history shapes and haunts these people’s lives. Creating and sustaining narrative tension in such a structure was a new skill for me, one that was exciting to attempt.

Q. Many Latin books have magical realism elements to them. How did you go about amalgamating and molding that tradition to the North American and non Latino readers?
A. At its best, magical realism is not an escape from reality, but a daring exploration of our real and gritty world. Gabriel García Márquez knew this when he wrote, in Autumn of the Patriarch, about a Carribean dictator who sells the ocean to U.S., leaving nothing but dry craters as far as the eye can see. Those craters are haunting, not because they’re possible, but because they’re talking about something urgent and disturbing and true.

That said, I see magical realism as an international inheritance that transcends borders. García Márquez was inspired by Kafka. Jorge Luis Borges was inspired by the Thousand and One Nights. Look at Toni Morrison’s dazzling accomplishment in Beloved. Really, I believe the roots of magical realism reach all the way back to Homer, to the gods’ fantastic meddling in The Iliad and The Odyssey. We have always stretched reality in literature, in order to better understand it.

Q. What are the challenges of book promotions in the social media age?
A. One challenge is that technology and social media strategies are changing so fast that there’s constantly a lot to learn. Even the most seasoned publishing professionals are continuously asking themselves about the best ways to leverage the new landscape. Another challenge: we novelists need long stretches of uninterrupted, quiet time to get our work done, and these days, that lifestyle is a bit at odds with the rapid noise of Twitter.

On the other hand, the social media age opens the most beautiful opportunities for a novelist. The distance between author and reader has diminished, and it’s incredible to receive frequent emails, Facebook messages, tweets, and comments from readers all over the world, describing their experiences with my books, or asking questions about the minutest details. I treasure these exchanges. When I was a bookish kid, living authors seemed impossibly inaccessible, and I never wrote a fan letter despite the ferocity with which I consumed books. I think this level of access and immediacy would have blown my mind.

Q. Shameless plug disguised as a wise ass question: Why do you love ManOfLaBook.com so much and often visit the website?
Wise gal answer: What could be better than perusing the smart, intimate ruminations of a fellow passionate reader?

Thank you for the great answers as well as the wonderful book recommendations, which seem to be right up my alley. I would wish “good luck” to Ms. De Robertis but with that much talent – who needs luck?