Tomorrow, February 18 we will celebrate the birthday of award winning author Toni Morrison. An author, speaker, professor, and mother, Ms. Morrison has accomplished a lot and deserves to be honored as one of American’s greatest living treasures. 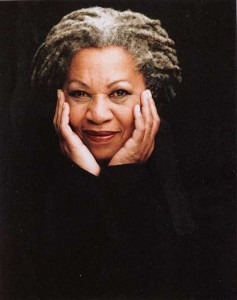 2 ) Upon entering first grade, Ms. Morrison was the only black child… and the only one that could read.

3 ) One of Toni Morrison’s favorite authors is Jane Austen.

4 ) Morrison’s theses in college was on the suicides of famous authors.

5 ) Ms. Morrison was one of the very few black editors at Random House.

7 ) In 1987 Toni Morrison became the first African American woman to hold a named chair at an Ivy League university when she was named the Robert F. Goheen Professor in the Council of Humanities at Princeton University, New Jersey.

8 ) Ms. Morrison won the 1988 Pulitzer Prize in literature for Beloved.

9 ) Winning in the Noble prize in 1993 cemented Ms. Morrison’s status in history as the first African American to receive the prestigious award.