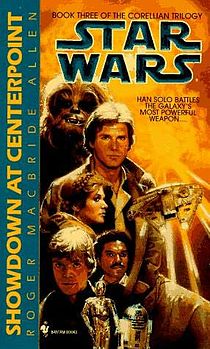 Showdown at Centerpoint is the final book in Roger Macbride Allen’s Corellian Trilogy. In the first two books we followed Han, Leia, and their kids along with Chewie, Lando, Luke, and our two favorite droids as they all took various paths to end up in the middle of what appeared to be a rebellion in the Corellian sector.