About:
The Undercover Nazi Hunter: Exposing Subterfuge and Unmasking Evil in Post-War Germany by Wolfe Frank (edited by Paul Hooley) is a non-fiction book composed of articles the author wrote while he researched post-war Germany’s attitude through street level  investigations. Mr. Frank, a German born British citizen, was the Chief Interpreter at the Nuremberg Trials. 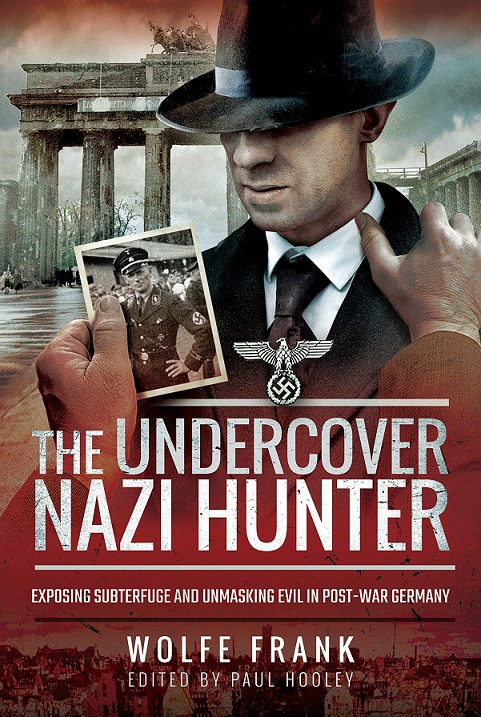 Thoughts:
This is a fascinating book, and even though the majority of it was already published in the New York Herald Tribune during the later 1940s-early 1950s. Wolfe Frank managed to escape Germany before being put in a concentration camp as an “enemy of the state”, being half-Jewish didn’t help either. The author managed to get to England and become a citizen.

The author was jailed in England for a few months to make sure he’s not a spy (I would imagine) but then joined the British Army as an interpreter, rising to the level of Captain and Chief Interpreter at the Nuremberg Trials delivering the death sentences to top ranked Nazis, earning him the nickname “The Voice of Doom”.

After his service, Mr. Frank came up with a brilliant idea: to reintegrate himself into German society and find out how the denazification program is going through street-level observations. His articles with fascinating insights were published at the New York Herald Tribune to much acclaim. In 1949 Mr. Frank followed a tip to track down and capture SS-Gruppenführer Waldemar Wappenhans, after taking down his confession Mr. Frank handed him over to the authorities. The Wappenhans confession is included in the book as well.

Then they were forgotten.

That is until Mike Dilliway, living near Wiltshire village of Mere, decided to clean his attic in 2015 and discovered eight boxes he got from his friend, Wolfe Frank before he took his own life due to poor physical and mental well-being.

Together with Paul Hooley, editor of this book, the pair spent a year putting together Mr. Frank’s notes in some sort of order to create a manuscript. The articles, originally published in a series called Hangover After Hitler, together with the Wappenhans confession and excellent editorial notes make a compelling book which is difficult to put down.