About:
The Flash, Vol. 1: Lightning Strikes Twice by Joshua Williamson (illustrated by Carmine Di GIandomenico) is a graphic novel starting a new story line for the scarlet speedster. This graphic novel collects The Flash: Rebirth #1, and The Flash #1-8. 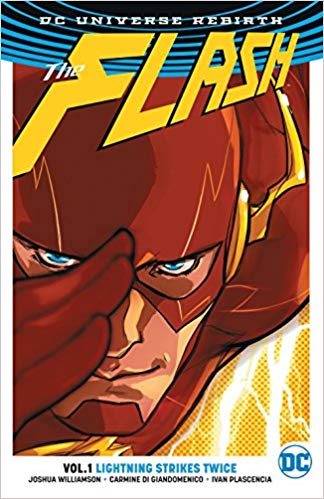 Thoughts:
I really enjoyed the new Rebirth story lines, and this issue is no exception. Right off the bat, The Flash, Vol. 1: Lightning Strikes Twice by Joshua Williamson (illustrated by Carmine Di GIandomenico) held my interest – from beginning to end.

The villains are an important aspect of this graphic novel, including a new one called Godspeed. There are a bunch of new speedsters, which made me lose track at them at first, however it will be cool to have Barry Allen have Kid Flash back as a sidekick.

The art was really good, it’s difficult to draw speedsters but Mr. Di GIandomenico did a great job bringing the feel of motion into the panels.  Even with a bunch of normal people suddenly becoming speedsters, something which could get very messy in both narrative and art, the creative team somehow made it work.

This is a very good issue, as I mentioned before the story could have easily been confusing, but we got a really good first issue.

Synopsis:
The Flash (Barry Allen) is learning more about his powers and what fuels them. The Speed Force that flows through The Flash and gives him his powers, strikes all over Central City.

Discovering his powers is not the only thing Barry Allen is worried about, there are secrets from his past and Flashpoint, a new world he created by changing history.

Zohar — Man of la Book
Dis­claimer: I got borrowed this book from a friend.
*Ama­zon links point to an affil­i­ate accoun