About:
The Atlantis World by A.G. Riddle wraps up the sci-fi trilogy called The Origin Mystery. This was Mr. Riddle’s debut novel after working as an IT entrepreneur. 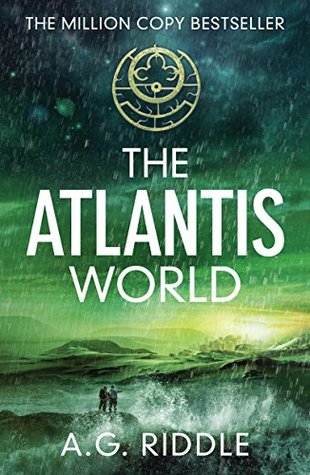 Thoughts:
I enjoyed the first two books in The Origin Mystery series, especially the first book. I was looking forward to find out how The Atlantis World by A. G. Riddle wraps up the trilogy, and what happens to the characters we’ve been following throughout.

This book gotten more and more complicated as I continued to read it. The first two books were about humanity, this book was a science-fiction opera which opened up more loose ends than it was trying to tie. The author added more view points and pieces to the puzzle which, to me, were confusing.

I really enjoyed the overall premise to he series, but in this last book I’m not sure what the author wanted to convey, or if he had a trilogy planned out at all. It seemed like a bunch of story-lines thrown together for good measure, crossing fingers they would somehow work and make sense.

Once I finished the book I could barely summarize what it was about, luckily it’s a quick read. One could actually skip almost half the book and wouldn’t miss much. I slogged through the second and third quarters of the book, mixing stories that go back and forth building into a climax which never happened.

I also found this book more difficult to read, I found myself skimming whole pages and, eventually, having to re-read several because I was getting lost in the narrative. The punch to the gut was that I could have missed those parts and still have a good idea of the story and where it was going. I should have learned right off the bat which parts that the author was jumping to I could have just skipped.

The premise of The Atlantis Gene, first book, was unique and exciting. I was really looking forward to where the author is going to take us on his journey.  In general, I thought the trilogy was good, even though this book suffered from a dizzying amount of plot twists and characters.

Synopsis:
Dr. Kate Warner,  a famous academic now that she had cured a global pandemic, now has to cure herself. Dr. Warner also finds out that she had misjudged how big the Atlantic conspiracy is when humanity faces a threat, once again.

Dorian Sloane finds himself playing a puppet to the Atlantian Ares and his scheme. Ares reveals the threat to humanity he has been planning all along, and Dorian feels the need to accommodate him.

Buy The Atlantis World from Amazon.com*
More Books by A. G. Riddle*