About:
Somewhere in the Mediterranean by Mark Tiro is a science fiction book taking place during an unspecified time, dealing with a ship of refugees from World War II. Mr. Tiro is an author from California. 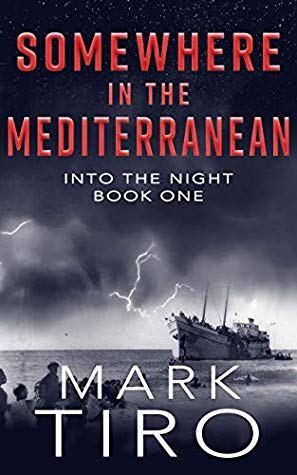 Thoughts:
Somewhere in the Mediterranean by Mark Tiro is a short story, which leaves one with many questions about the plot and the philosophical questions it asks. While the story does tackle current issues, it does not smash you over the head with it.

A ship, which one might say miraculously floats, fleeing Europe from the Nazis finds sanctuary in Israel, but they’re 50 years too late. The story mixes fact with fiction and fantasy, with a little nostalgia if you lived in the region or visited there during the 70s and 80s.

I missed how the main character ended up where he was. Maybe I misread something, maybe I just didn’t pay attention. I figured it out after rereading a few passages, but for a short story like this I thought it should have been clearer.

I enjoyed this book, the writing style took a few pages to get used to, but the story hit a nerve. I did expect more from the synopsis, and wish the author would have expounded on his idea.

Synopsis:
Israel sometime during the 1990s, a beach is cleared for an army exercise, but one man accidentally stays there. The man witnesses a strange occurrence, a World War II refugee ship arrives. Why and how are two of the many questions that arise, among many others.

Buy Somewhere in the Mediterranean from Amazon.com*
More Books by Mark Tiro*