About:
None of the Above: The Untold Story of the Atlanta Public Schools Cheating Scandal, Corporate Greed, and the Criminalization of Educators by Shani Robinson and Anna Simonton is a non-fiction book about the experiences of Mrs. Robinson who has been involved in this humiliating and undignified event. Mrs. Robinson. After several years, Mrs. Robinson, whose appeal is still pending, is able to talk about this issue. 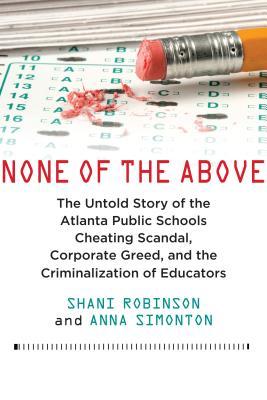 Thoughts:
I like to point out right off the bat that I am a cynical man. I don’t believe everything I read, and if I do I check it with a several reliable sources.
Most of the time.
I’m also a big supporter of public education.

None of the Above: The Untold Story of the Atlanta Public Schools Cheating Scandal, Corporate Greed, and the Criminalization of Educators by Shani Robinson and Anna Simonton was an interesting as it was informative, it actually tells two stories though. One that of Mrs. Robinson who was charged as one of the teachers who allegedly changed the grades of her students to conform with standardized testing requirements, the other is about the circumstances that caused public schools to be considered failures.

I will start with the second part, as it has to do with the reasoning behind schools changing grades.  The book goes to blame politicians working together industrialists, as well as “do gooders” (mostly evangelical Christians) who are rich enough to have their voices heard as to the issues with public schools. The politicians and industrialists set out to take over poor neighborhoods, demolish them, and build more expensive residences (and thus higher tax revenue), at the expanse of the lower socioeconomic class who are mostly African American. The rich “do gooders” mainly want vouchers and charter schools as a form of subsidy (one might even say government welfare) for private schools.

The part where Mrs. Robinson claims her innocence, is where my cynicism takes over. Not that I think Mrs. Robinson is guilty, I’m simply not convinced either way and this book is very one sided in that regard (please note that I have no reason not to believe her). The part about her short teaching experiences, trial, and the media circus that followed, even though it is from her point of view, is fascinating and I did feel as if her and her friends got steam rolled over by an overzealous prosecutor. I feel justified in saying that because out of all the teachers that were prosecuted none where white, or rich, even though it was proven that the rich white districts “cheated” by a larger margin than the poor ones.
Also, a twenty year sentence for changing scores on a test?
Even if true, it is outrageous.

This book, I felt, is a short, incomplete introduction to a much larger problem. The conclusions the authors reach are very important to our society and justice system and do deserve a longer, more thorough book or most likely a series of books.