“Jewish Pirates of the Caribbean” by Edward Kritzler is about a small part in the vast history of the Jewish people. This is an incredible book with many fascinating characters their intrigue, exploration and adventure. The author focuses on the Jewish pirates as well as the legitimate Jewish seamen (such as pilots, navigators, etc.) since, let’s face it, there is a reason you never heard of Jewish pirates – there weren’t that many. 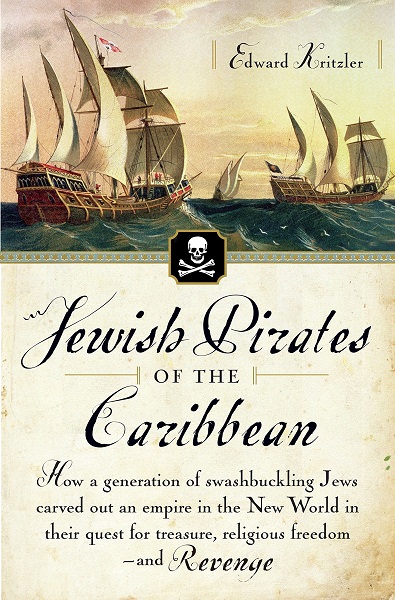 Actually, “legitimate” might not be a good word since at that time many pirates were state sponsored (they were called “privateers“).

The storyline follows the Sephardic Jews (those expelled from Spain and Portugal during the Inquisition) who tried to find a place in the New World and spans several centuries. Of course, once they settled in a place where no one wanted to settle, made it flourish and succeeded beyond anyone’s wildest dreams the Kings of Christendom sent out the Inquisition under the guise of “holier than thou” to convert the heretics (in the process confiscating and splitting their businesses and possessions 50/50 with the Crown) and let the Diaspora cycle start over.

One of the most fascinating characters in the book is Samuel Palache, the “pirate rabbi,” who grew up in the mid-1500s in Morocco and was a formative Jewish leader, a rabbi, an advisor to the Sultan, a diplomat and, of course, a pirate. The book is sprinkled with details about Jewish life (Palache had a kosher chef on his pirate ship) from both the Old and New Worlds especially in Jamaica (the author’s home) and Amsterdam.

My problem with the book is that it offers very authoritative historical statements, without any proof. For example the part where the author tells us about “King Solomon’s trading post”, which is only a theory since that there is no proof that Jews lived in Spain (Sephard) during the reign of King Solomon; or that Columbus’ had a hidden agenda which was to find the Sephardim Jews a place to live free from the terror of the Inquisition – again – no proof of that whatsoever except that the Colón (Columbus) family allowed Jews to live at the island they owned and did not allow the Inquisition to set a foothold at said place.
Another issue I had is the editing. Some words are italicized, other words which fall in the same category (such as foreign words) are not and the same is true with capitalization. Maybe it’s just me because English is my second language and those things simply stick out at me like a sore thumb.

Nevertheless, “Jewish Pirates of the Caribbean: How a Generation of Swashbuckling Jews Carved Out an Empire in the New World in Their Quest for Treasure, Religious Freedom–and Revenge” is an enjoyable book and I learned a lot about a fascinating chapter in the Jewish history. Just beware that you’ll be getting a book about tangled and colorful adventures of the high seas but not a solid history book.

Buy Jewish Pirates of the Caribbean from Amazon.com*
More Books by Edward Kritzler*