About:
I Belong to Vienna: A Jewish Family’s Story of Exile and Return by Anna Goldenberg is a memoir of the author’s family experience as European Jews during World War II, as well as reflections on the effects on her life and theirs. Ms. Goldenberg is a reporter who currently lives in Vienna, Austria. 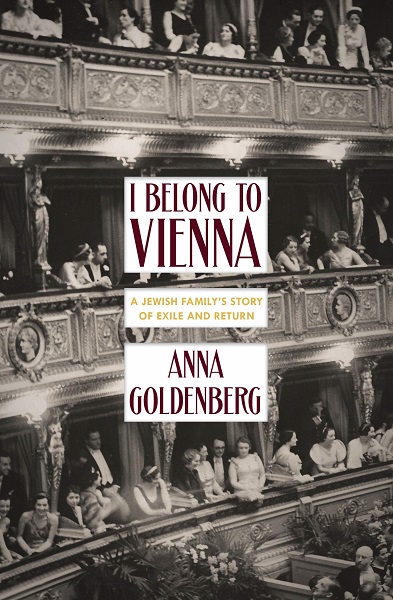 Thoughts:
Like many others decedents of families whose members survived the Holocaust, the author set out to find out more about what happened to her relatives during those horrible times. I Belong to Vienna: A Jewish Family’s Story of Exile and Return by Anna Goldenberg is the product of that research, and the author’s analysis of those events, how it shaped her family and their lives.

It has been known that Holocaust survivors did not talk about the evens which they survived until very late in life, some of their most traumatic events were not even known to their children. In later years, they have started to open up, projects like Stephen Spielberg’s USC Shoah Foundation has filmed over 52,000 persons telling their stories so there will be a record and they won’t be lost to history.

Ms. Goldenberg managed to piece together stories from her family, as well as dig in archives to find some documents to verify those stories. Part of the book even manages to give the readers a glimpse of what life was like in Vienna before the Nazis took over.

The book missed the mark in recounting the memoirs of her grandparents, but hit the mark when it came to the author’s reflection of the events which they told about. Personal events, mind you, not the big pictures which one can read about in most history books. The narrative feels like the author couldn’t decide if the book will be a memoir, or about the impact the Holocaust had on the survivor’s children and grandchildren – so the book is somewhere in the middle but doesn’t quite hit the mark here nor there. To me it seemed like every time the author had an insight, she chose not to examine it closely, but just moved away from it.

The book is certainly worth reading, we should not be losing this kind of history, and future generations of the author’s family will have something that many others wish they did. Frankly, I’m jealous of Ms. Goldenberg and others like her who has the tenacity and talent to do such research and write a book for future generations of their family, I wish I had just a little bit of that kind of talent.

Buy I belong to Vienna from Amazon.com*
More Books by Anna Goldenberg*

Zohar — Man of la Book
Dis­claimer: I got this book for free from the LibraryThing Early Reviewers Program
*Ama­zon links point to an affil­i­ate account