About:
A Cobbler’s Tale : Jewish Immigrants Story of Survival, from Eastern Europe to New York’s Lower East Side by Neil Perry Gordon is a  historical-fiction book based on the experiences of the author’s family. This is Mr. Gordon’s first novel. 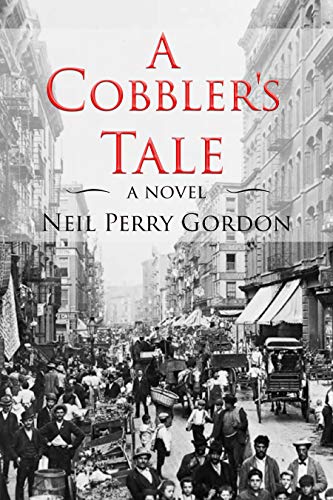 Thoughts:
I have to admit that I don’t know much about the European Jews before World War II, or the exodus from Poland around the turn of the 20th Century. After all, there were plenty of Jews in Poland for the Nazis to murder.

A Cobbler’s Tale : Jewish Immigrants Story of Survival, from Eastern Europe to New York’s Lower East Side by Neil Perry Gordon is an easy to read, almost YA, entertaining book. The author keeps the reader interested from chapter to chapter (most very short).

I thought the last part of the book could have been edited out. It really didn’t add anything to the story and just made the book longer, while keeping the main story which the reader was following on the sidelines.

The book gave me some good insight about the treatment of Jews in the early 1900s, while telling an interesting tale, with a few twists to boot. The author wrote that this story is partly based on his family’s experiences, which makes the book take on more meaning than usual.

Synopsis:
A Jewish cobbler named Pincus Potasznick is leaving his kids and pregnant wife to try and make it in America. The year is 1910, antisemitism is prominent but the Jews of Europe still feel safe, except those who can see the writing on the wall.

On the voyage across the Atlantic, Pincus meets Jakob Adler from Warsaw. Together the two immigrants work hard to start up Pincus’ cobbler shop, and along with Jakob’s illegal activities they are actually able to make a living. Pincus, however, has to get his family out of Europe as World War I rages on.